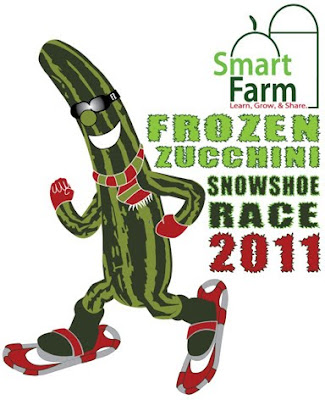 After a few fun hours on snowy trails on Saturday what better than going to a snow shoe race on Sunday. Barrington IL was holding the Frozen Zucchini Snow Shoe 5k race and I had some friends entered. What better than cheering on Cathie, Tom and Kim.

I've seen people snow shoeing before but never racing. This race was a sell out with 160 people and a kids race. Erehwon Outfitters had a small supply of rental shoes. They also supplied some great items in the racers goody bag. The goody bag was enough for me wishing I had signed up. The T shirt was a great long sleeve cotton with the clever race logo on the front. In the bag was a pair of merino wool socks, a water bottle, pair of winter gloves, some good healthy snack items, a small novelty compass (which actually appears to work), some hand lotion and other assorted times. I believe the sign up cost was only $25. The goody bag was worth that alone. The race also had some good post race snacks, coffee and hot chocolate then an award party at a near by bar with pizza and beer.

The 5k course was two loops of a city park which from the start line area appeared to have a few hills and likely an extension of the hills we passed on the drive in. The racers lined up almost cross country run style and where off. Snow was flying every where and the lead guys were flying right from the start. We watched them shoe around a baseball field pass the soccer fields then out into some park fields along the snow covered grass trails that from the course map are part of the park system. It didn't take the leaders long to get back to the start/finish at 1.55 miles and head out on their second loop. I was surprised how fast some folks were moving. I missed the winner returning to finish the race as I had crossed the soccer fields to get some photos across the park. Got back in time to see Kim finish her race and still smiling. Kim did great and was close to the top of her age group. Cathie and Tom raced together and they put the fun in fun by enjoying their race and not worrying about the time, more trail time for their money I say.

Everyone at this race was so friendly from the race staff, the announcer, the volunteers, the timing crew, the cheering fans and the big Frozen Zucchini. After the race most folks headed into downtown Barrington for pizza and beer at a cool bar.

Kudos to the race organizers for a race well put on. I think next year they can hopefully increase the numbers allowed. I think I'll be there. 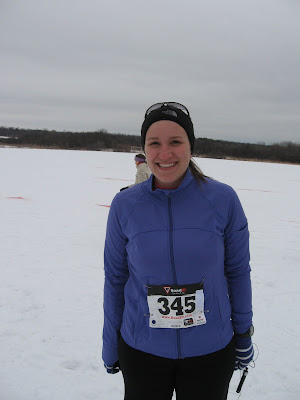 Kim before the start 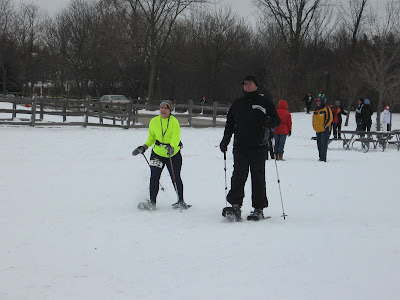 Cathie and Tom finishing
Posted by denalifc at 7:44 PM 1 comment: 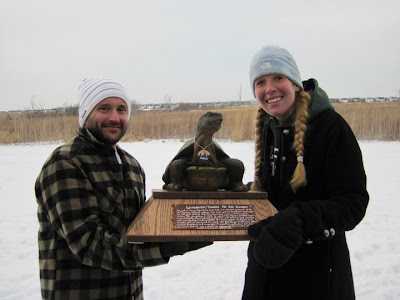 Windburn Six is a six hour run held in a local park on a 2.28 mile loop. Run as many miles in six hours. Winner is the one with most miles.

Today the trails were covered in snow, around five inches worth. The wind was lightly blowing at the start and the temperature around 28F. And this was tons better than 2010 when we had a foot of snow, wind, cold and 5F. A few guys ran in shorts but they move so fast and are quicker than the wind.

I wanted to run more miles than I did at Windburn 2010. I had a thought of running a minimum of 16 miles (more than twice 2010) but in the end my schedule called for only 3 hours running and then drive home. The first loop was tough as the trail had not packed down. I mixed in run and walk on this loop but the goal was not to be lapped right away. Most of this loop was spent snow trekking with Anastasia. She finished the Javelina 100 and in three weeks is heading south for Ironhorse 100. As we approached the start/finish line I heard a call come up that the leader, Mr Jim O'Brien was coming in behind us. I've never sprinted so fast, as least not in last 10 years and succeeded in nipping Jim to the score sheet. Of course he had now done two laps to my one. Went out on another loop with Anastasia and by the time we hit the back half a nice packed down trail was found. So we got some good running in.

Short break and some Gatorade back at SF. Emptied the limestone out of my shoes; OK who gets limestone bits in their shoes when the trails are covered in snow, only me. After one final big loop, headed out with Kelly for a short loop then another short loop this time with "King of the Road" Juli.

Fun times. I was sad to leave early but as they say I'll be back

Jim went onto win the men's division and Jennifer A won for the ladies. That's them at the top with their new BFF "James The Turtle".

Thanks Brian and CHUGs for another fun day out. 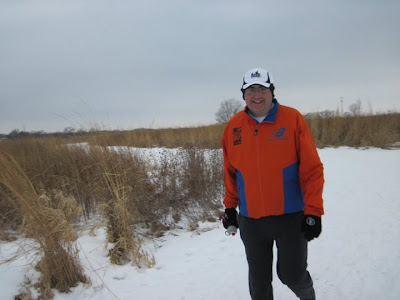 Me at Windburn Six. Photo by Kelly Gaines
Posted by denalifc at 10:41 PM 2 comments: 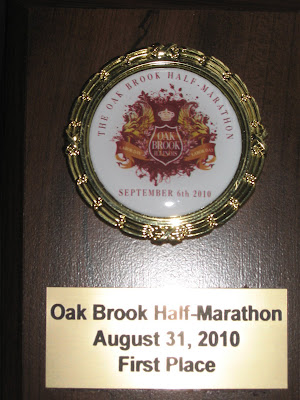 Back in August (31st to be precise) I did a 13.1 mile training run on the Oak Brook half marathon course. Being the set up guy for the Labour Day race I can't run the actual race so had decided to run it 6 days before giving me time to check out the course for "issues". As the start/finish and miles were marked ready for race morning it was like running the race.

After I ran I emailed the RD, a friend of mine, and gave him a “race report”. I told him when I got to the race site there was no start line set up, no aid stations on the course, no police controls, no cheering crowds, then at the finish line no medal for my race finish and oh I think I won. Well Mr. RD saved that email.

Today I meet Tom for coffee and to discuss some 2011 events and he presented me with the award at the top. LOL
Posted by denalifc at 9:50 PM 5 comments:

2010 has come to an end and overall it was a good year in running for me and this blog is all about running so this is what this article is all about.

Coming out of 2009 I logged a low 575 miles and run some races up to half marathon distance.

The Chicago Ultrarunner Group (CHUGs) had been formed at the start of 2009 and I was proud to become a member and meet many new friends.

In 2010 the CHUGs went from strength to strength under the leadership of Torey Jones and Brian Gaines. Those two and the rest of the CHUGs were a massive inspiration to me. Without them I am not sure I’d have hit most my goals in 2010.

I didn’t really set any goals in stone actually and if I didn’t make them it didn’t really matter but in an earlier blog report I had listed the following: Run a marathon, run a 50k, run a 50 mile, doing some biking, break 1000 miles running. I also have to add try something new.

I had not run a marathon or a 50k in over ten years. Never done 50 miles. My brand new mountain bike is seven years old and has 500 meters on it. My year older road bike as maybe 90 miles on it. Both have more dust on them than miles or me. In 2009 I ran, as mentioned, 575 miles.

Happy to report that of those five plus one goals I hit all but two.

In May I ran the Des Plaines River Trail marathon. I was slow, very slow but I placed top 40. Well 37th overall, hmmm out of 38 finishers. http://desplainesrivertrailraces.com/

In September I ran the Rock Cut HOBO 50. I was slow, very slow but I finished. I was a few time zones behind most people but it was great to be back in ultraland. I wrote a report on the race. http://denalifc.blogspot.com/2010/09/rock-cut-hobo-50k.html

Sadly, also the bikes stayed locked up and gathering dust. My total bike miles was 11 miles as I was asked to do lead bike at the North Shore 5k race last June. I used a borrowed bike and although 5k is only 3.1 miles I prerode the course so I’d lead the runners the right way. Took out some course marshals then rode back to the start then biked to an important intersection where the 5k and half marathon went different ways. I wished my biking in Highland Park had got me to get the duster out. 2011.

And for something new. Nothing was planned but in August and September I took a six week introductory yoga course at a nearby studio. I can’t speak enough about how much I enjoyed the course and its benefits to running. Sadly I have not done any yoga since but that has to change in 2011.

The other something new was trying an orienteering meet and I am hooked. It combines my love off trail running with a treasure hunt and using ones brain. I’ll be back. Thanks Deanna.

My favourite race. Tough decision. DPRT marathon meant a lot as it was me getting back to distance. Sunburn Six I hit my goal on the hottest day of the year. WORS 5k was run on mountain bike trails near Milwaukee and as to be the hardest 5k I’ve done.

But title for my favourite race of 2010 goes to the Rock Cut HOBO 50k.
Rock Cut is a state park near Rockford. The race is all trails besides half a mile paved at the very start. The rest is a nice mix of cross country, horse, hiking, mountain bike trails, a few river and creek crossings, some nice climbs and lots of CHUGs. As it is a two loop course with the second loop done in reverse I got to see lots of friends and the CHUGs had a large number of runners and many of them placed in the top ten including the female champ Sarah Jurgaitis. I had done the 25k twice before but never the full HOBO. Yes this was a goal race for me and no way was I not going to finish even if it took me forever, I had to get the finishers T shirt. Besides the course and great volunteers the best part of this race was the welcome I got at the finish. Waiting for me were CHUGs Kelly, Brian, Paige, Geof and Deanna plus Rockford runners Norm and Joyce and of course Larry the RD.

That welcome from the CHUGs meant the word to me. They are what have inspired me in the past 18 months and especially in 2010. Those guys rock. Thank you CHUGs, everyone of you.

So where will 2011 take me running wise. Not sure. I’ll have some goals but they are not set in stone. Hopefully a first 50 miler. Hopefully a few marathons and 50ks. Hopefully a duathlon. Hopefully some road and mountain biking. Hopefully an average of 100 miles ran each month.

Races I’d like to do to include Dances with Dirt 50k at Devil’s Lake, Des Plaines River Trail 50 mile, Fox Valley marathon or HOBO 50k, a spring marathon or 50k, Muncie Powerman Duathlon, four or five orienteering meets and Sunburn 6 or 12. I also hope to crew at Badwater, race or solo.

Thanks for reading and being there with me in 2010. Again CHUGs rock. Thank you friends.
Posted by denalifc at 12:09 AM 3 comments: