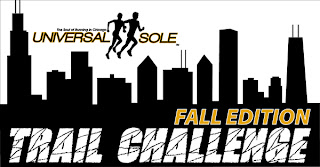 The New Leaf Ultra Runners today invaded the dirt trails of Cook County's Schiller Woods to run the Universal Sole Trail Challenge (fall edition). The race was only 5+ miles but what was a group of ultra runners doing at a 5+ mile run. Well a fast race and lots of fun with friends.

For a number of years Universal Sole had held a 5+ mile race on this course. I did it twice during that time. First year was a wet race with a flooded road tunnel underpass and a creek that leads to the Des Plaines River overflowing it's banks. Second time the course was dry which made for a course PR.

Universal Sole changed hands and the race took a break but this year RD Joel brought it back first with a summer version and today with the Fall edition back on the race calendar. When I heard Joel was bringing it back I knew this was a must do race. I first meet Joel, all to briefly when we both helped at the Palos Detonty 50k. I was charged with aid station set up and Joel did lead bike. At the time Joel worked for Clif Bar as Midwest area manager promoting the product at race expos and events. Last 3 years I've worked for Clif Bar at those events that Joel used to manage. Although he is not part of Clif Bar now he will always stop by the booth when Universal Sole have a booth at the same event. Always great to see Joel.

I offered to put the Trail Challenge race on the New Leaf Ultra facebook page and Joel was happy to get some ultra runners come to his event. I think there was around 12 or more signed up and one member who also coaches runners and triathlete got some of her students to sign up for their first trail race.

Joel went old school with a great cotton T shirt. Sure tech Ts have there place but I like a nice cotton T shirt for wearing after events or at home or when hanging out with friends is great to have in the collection. And it was red with a great logo.  I'll use the tech ones to train in. He also had a great option of subbing the T for a handheld water bottle or paying an extra $5 and getting both.

After listening to some fine 80s music pumping out of the PA and some race course information around 150 trail runners toed the line under the giant 312 Goose Island (beer) inflatable start arch. I lined up at the back with my blogger friend Kim (or Kimbot as she likes to be called, sometimes) and decided to be the very last starter. 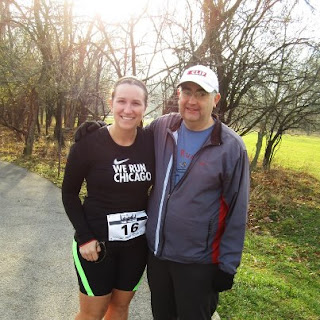 (photo by Steven courtesy of Kim)
We started across a flat wide field but soon hit a narrowing onto a trail that I think Joel had created for the race. It was full of leaves, roots, tree branches and what might have been a dry creek bed. After that we moved to a gravel path around the start area. After that the course followed dirt single and wide track widing around the whole preserve. Some of the single track had a little wetness to it but nothing of concerns. The only water and mud section was the tunnel under Lawerence Ave. which we hit going out and coming back. Joel and his crew had done a great job of marking the course with red flagging markers and at major intersections had either a course marshal (thanks volunteers) or a big arrow sign (thanks sign). No one should have got lost, no one. One water station on  the course managed by Kim's friend Erin (thanks Erin). We also hit that twice as it was by the tunnel.

I was at the back of the race from the start. Passed some people thanks to the speed Kim set in the first few miles. I knew at some point Kim would pull away from me, I was likely slowing her down but it was a fun two miles running with Kim. Kim is new to trail running but is a road veteran with many age group awards. This year she ran her first ultra at the North Face trail 50k in Wisconsin. Kim is a New Leaf Runner. 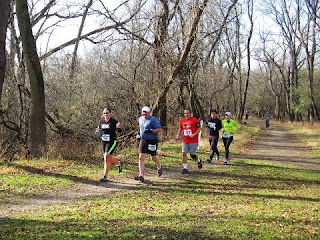 Kim and I "leading" a pack (photo by Steven)
My goal was just to finish. A certain lack of train this year as lead  my runs and limited races to have just finish thoughts. Secretly under one hour would be great and a Schiller Woods PR. The course was similar to my previous two times there if I am recalling the old course right, only so many trails there.

Although still near the back of the pack I finally finished in 57 minutes and 20 seconds around 8 minutes faster than last time I did a race on this course. I'll take that. Maybe not training works, nay I got to train.
Kim got a photo of me finishing with the great 312 Chicago (beer) start/finish arch. 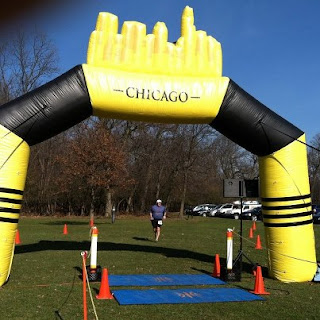 Universal Sole have posted photos from the race on their Flicker account. Here is the link to one of Kim and I in first few miles (likely first mile or so)   http://www.flickr.com/photos/universalsole/8197769574/in/set-72157632040405145/
Thanks again to Joel, Universal Sole, US staff, crew and volunteers, all the sponsors and a big shout out to those from my running group New Leaf Ultra Runners who proved they can go fast or long when it comes to running. Thanks all

If anyone is looking for more trail fun a new trail event group is putting on lots of trail races in the Chicagoland area. They held one at Schiller Woods a few weeks ago and have another in two weeks (I'll likely be volunteering depending on work) plus in 2013 they hit the trail running with many events from 5k to half marathon, all trail. Check out  http://www.muddymonk.com/ The Muddy Monk RD also ran today's race, great meeting you Art and thanks for bringing more trail races to Chicago area.
Posted by denalifc at 6:37 PM 3 comments: