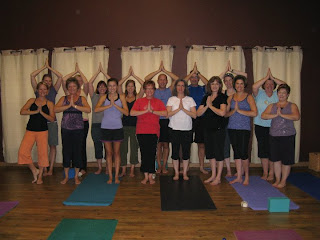 Never tried yoga before but decided to give it a go. Local yoga studio offers a six week fundamentals (beginners) workshop. Did some research and they came recommended. I had a blast and would recommend yoga to all and especially runners. First four weeks we learned the asana (poses) of Hatha Yoga. Each week would start with a recap and then move to new poses. Week five we put it all together in a teaching set up plus a few more poses. Week six was done like a "real" level one class.
Two days before the last class I had ran the Rock Cut HOBO 50k. Thought I'd have an issue doing this last class but in fact it stretched out the tad achy sore legs and I felt great. In the six weeks I learned so much and did so much, what an adventure of discovery. I have a lot still to learn and likely messed up some poses even after six weeks but Claudine is an awesome yoga teacher and with helper Karen guided us and reset us.
I intend to redo the fundamentals calls again as I am not quite ready for a regular level one class and again I'd recommend yoga to all runners
http://www.livingyogaaurora.com/
Photo above taken at the last class ("borrowed" from Living Yoga Facebook page) 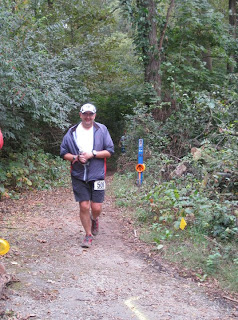 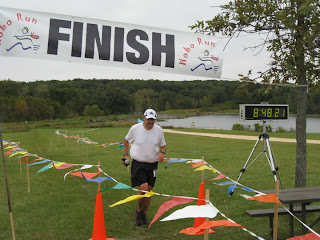 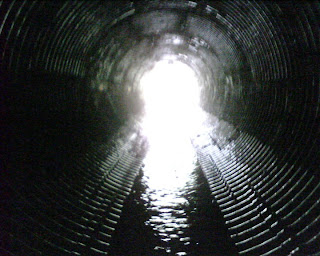 Fun but not easy race. Living in the city that supplies the race name this was a must do for me. The trails they were using are the DuPage Forest Preserve Danada and Herrick Preserves. I run these trails at least once a month so familiar with the layout and the hills. Or so I thought.

Race started on the horse training track near the DPFP HQ building in Danada. Starting in 3 waves with 30 second breaks I started in the last wave and near the back. Race had around 600 people but I did not feel the start and the first turn onto the narrower trail was congested. First 3 miles we headed east towards the equestrian center and out into the Danada trails that head to Butterfield Rd. This is where we would encounter the biggest hill on the course but not the only hill. First was a 1.5 mile leg to the turn around and the on the return the hill appeared. Having ran this a few times I knew I could run non stop and that was achieved. Back to the start area with lots of people watching their runners and then we headed towards Herrick Preserve about a mile away. This trail had lots of vegetation in a vivid yellow colour. Then we hit the two mile Green Heron loop which we would do twice. Here the hills were shaded. I was carrying a handheld water bottle for the race and filled it up at the aid station twice on this loop. Emerging from Green Heron we headed west towards the main Herrick parking area but then turned on to the mile long Meadowlark trail. This has some rolling hills but shaded trails. This section runs next to the Arrowhead Golf Course. Then along the regional trail which is mainly down hill or flat for another journey along Green Heron. About half way along Green Heron I see my friend Kevin biking towards me. He told me he might come out to run some of the trails and cheer the runners on but Kevin locked his bike up and ran with me for around 2 miles. I am sure Kevin has never ran so slow in his life but it was great having some company and chatting with him. At the turn off for the trail that headed to the finish Kevin ran back to his bike and challenged me to get to the finish first. Kevin is a fast runner so I had my work cut out. Add to that and I need to mention the weather was getting hotter and so was I. Well final I see mile 13 in front of me but hear shouting from behind, it's Kevin. Oh so close but I made the turn back onto the horse track and sprinted, for me, towards the finish. I felt strong and hopefully it appeared that way to everyone cheering me in. Under the banner, rip of the bib pull tag and collect a finishers medal. I was done. I had aimed for 3 hours as it was a supported training run for me. Finished in 2:49. OK so that is not fast but I was happy with it and can say I did the first Naperville Trail Half Marathon.

Big thanks to Peter the RD for putting on the race, nice job and to the great folks at the DuPage Forest Preserve and of course all the volunteers. I'll be back

Note: One thing a few runners were heard saying was there should have been more water stations. Tad hard to do on this course. All the aid stations are set up near road or parking access. DPFP allows NO motorized vehicles besides their own on the trails. This would mean lugging by hand or pull cart supplies. I set up the Oak Brook half marathon course last weekend and for Fullersburg had to load the cones and signs into a child's red wagon and pull it around the 2 miles I had to set up. Not easy. The race info and map clearly mentioned where the aid stations where. I carried my UD handheld water bottle with me and filled it up twice. Many folks wore fuel belts or other hydration systems. They came prepared.
I do wonder if it is possible to start the race a little earlier though.
I would also like to see runners think where they drop their drink cups and gel wraps. For the one gel I used the wrap came home with me.
Posted by denalifc at 9:47 PM 2 comments: