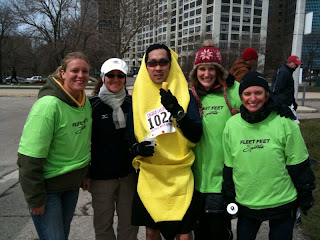 Photos taken by Adrian Belitu
In photo: Sarah, Karen, runner # 1022, Torey, Jennifer
(Ben and myself in the background)
Today I volunteered at the Chicago Lakefront 50k with a bunch of fellow CHUGs.

After catching an early Metra train in from Naperville then the CTA brown line El I walked from the station through my old neighbourhood where I had lived for 12 years to the lakefront and meet up with CHUGs Ben, Sarah, Tony and his son Nick. Two other volunteers from the Lincoln Park Pacers, Cathy and Colleen were also there. Jen, Torey, Jim and Adrian arrived later on. Fleet Feet manages the water aid stations at this race and their coordinator, Karen, was there to help.

As with most Lakefront 50ks the day was windy but the temperature was not too bad and when the sun came out it felt just right, at least for running. This race allows earlier starters but we only saw a few. Finally the lead guys came into view. Quick in and out with their bottles filled. More runners trickled in and then a big rush with all volunteers rushing to hand out cups of water and energy drinks. Then it slowed down for the back packers.

Lakefront 50k is three 10.33 mile loops. We was stationed at the far turn around so we saw them at miles 5, 15, 25 (approx). Most runners looked in good shape most the race. Few complained of soreness but after 25 miles it is to be expected but all turned around and headed for home. We only had two drop out but they were still smiling and basically was not their day.

Although out there for around 6 hours the time flew by. Sarah and Ben got their volunteer hours needed for Vermont 100. It was a good day for a good CHUG gathering. The CHUGs were out in force today as a large bunch more were down south at the Clinton Lake 30 running on a very hill course, another 3 loop race.

Race results will be or are here:
chicagoultra.org
chrisultra.blogspot.com
Posted by denalifc at 10:05 PM 4 comments: