Run with the Lions 5k year 4

This 5k race put on by runners for the kids gets better every year. I write about this one after every race and again was not disappointed http://www.runwiththelions.com/

The Run with the Lions 5k takes place at Warrenville's scenic St James Farm forest preseve at the end of April and I was there for my fourth year. This year a few of my Bolingbrook Fun Run Club buddies joined me and kindly hiked the course with me due to a possible IT band issue.

Picked up my race stuff on Wednesday at Longwood Elementary school. The race is a benefit for the school's PTA so they can provide activities for the kids that attend the school. They also encourage the kids to be a part of the race, either volunteering or running. The race stuff was another awesomely designed tech T shirt, a race bib and a bag full of sponsor info and coupons. There was also to be a medal upon finishing followed by sponsor food for refreshment at the end.

I get to races early and found myself parked two cars from Gladys, BFRC Pres. Funny I found she was parked there due to social media. Kristin, another BFRCer joined us in Gladys car and we chatted about a spectrum of things before braving the chilly day to head over to the start line. Start area photos were taken before the announce told everyone to go to the start line 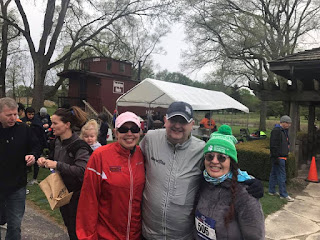 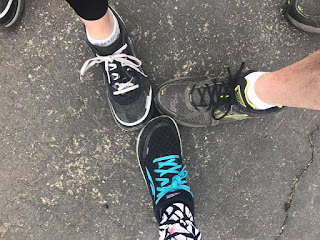 
We let the fast folks line up ahead of us and then joined the hikers. Right after the start the course hit a grass allee section then out to a wide grass section through a meadow then onto my favorite part a section of muddy single track that past the creek that runs through St James. That was the first 2/3 of mile. The rest of the course was the familiar groomed limestone trails that Du Page forest preserve install in most of their trail systems. Of course we joined on an up hill section but it was scenic as we went through a wooded area and around a few lakes. As I was familiar to St James having ran there a lot I gave Gladys a grand tour including pointing out the high school course cross trails 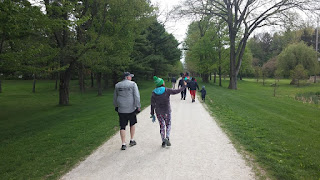 Gladys and I near mile 2 (photo by Kristen)

The course also took in part of the Illinois Prairie Path before rejoining the St James Farm trails for a loop by some of their famous buildings.


Gladys, Kristin and I finished strongly in a good time for three runners hiking the course. We high fived the school Lions mascot on the way in and a volunteer presented each of us a finishers medal, The medal is different every year and incorporated the race shirt.

After race food was provided by a number of the sponsors included soup, sandwiches, bagels  banana, potato chips and water. There was also a fund raising silent auction which had many awesome items to bid on. Hopefully they raised a ton of funds for the PTA.

Year four was another fine event and a great success for all. Thanks to Longwood PTA, all the volunteers, sponsors and runners/walkers. I will be back for year five and recommend you join me. 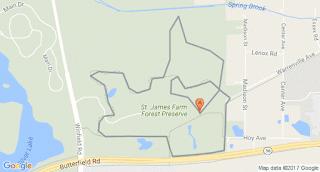 (All photos and logo owned by Gladys, Kristin, Ian or the race)

Posted by denalifc at 9:45 PM No comments:

Saw Wee Kee is a forest preserve park operated by the Oswegoland Park District on the border of Oswego and Yorkville. It was developed in part by the District and the CAMBr mountain bike group. Although not as many miles of trails compared to Palos or Kettle Moraine there are reported 7 miles of MTB trails. Some are wide enough for cross country ski type but much is narily single track.


Having always wanting to run this trails I took the opportunity to take part in the Districts annual trail run. A month before they had a flash sale so a group of runners from the Bolingbrook Fun Run Club signed up. We was not to be disappointed.

I arrived fairly early and got parked in the main small lot. Took a short hike down the last part of the course to see what the trail was like. The last 1/4 mile was flat although bumpy and not at all like the rest of the course as  would soon find out. Picked up my race bib and hung out with some BFRC (others would arrive later).

A few unique things about this race is the 4pm start but you can start any time between 4pm and 5pm, runners are sent off one at a time in 15 second intervals and the T shirt plus buff was given out at the finish (all shirts were preassigned so no worries about them running out of your size).

Two weeks ago I had hurt my knee running at Greene Valley. Going up hill is currently an issue and this race was a lot of ups and downs. I knew I'd have to hike much of it but as I just wanted to be out there exploring not an issue. I was probably in the last half to start as others must have lined up before I even ventured over to the start. The RD said some words about the trail course marking consists of pink ribbons hanging from trees and some trail intersections cordoned off. There was also a few course marshals and two aid stations, one we hit twice. She also mentioned one hill had a rope as it had rained heavily the night before. As it was most of the trails were dry and even dusty.

First half a mile was wider track that had some climb but not much. Soon we hit a mile long out and back section that was more narily single track including some rough climbs up and down. One large down/up hill was tough on my injured knee but I made it. Soon we hit a loop section, still single track and with some nice climbing and that rope hill. I was able to avoid the rope until the very top where there was a sort of lip to the summit. After that we ran some rocky down hill sections and had to cross a creek that was ankle deep with clear cold water; some might have jumped it but guessing most just plowed through as I did. Given the air temperature was 80s (yes in April) it was some what refreshing. Back to the out n back where I got to high five with five BFRC who had been the last to start. Got to the last aid station and was directed across the road to the 1/2 mile straight, flat and bump trail along the Fox River to the finish. My Garmin read 3.3 miles at the finish.

Was presented with a cool long sleeve blue tech T shirt trail run and green buff. Nice design on both. For refreshments they had chili from a local restaurant (told it was taste but I don't eat meat), bananas and water.

Waited for the last BFRC runners to finish then we all pose for the traditional club photo. 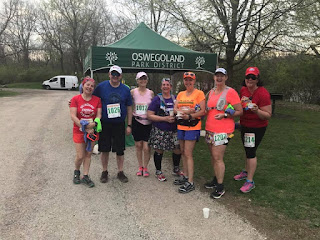