Today's story is about a long day that starts with running races and ends up with a concert and lots of driving.

Woke up at 3:10am on Saturday morning ahead of my alarms for the start of a fun day of event work, driving and concerts.

First up was the Chicago Lung Run 5k and 10k being held on Chicago's Lakefront at Montrose Harbor. Race had around 350 in the 10k 450 in 5k and similar in the 1 mile walk.

On the drive in to meet my friend Lynne the Kennedy Expressway was closed due to a bad accident. All traffic was being detoured off the expressway which resulted in a traffic jam at 4.30am as four lanes went down to one lane then a crawl along a residential street with stop signs every few blocks. Finally got back on the Kennedy and made it Lynne's house to then drive and pick up  a rental van.
For the race Lynne and I set up the race courses for the two distances then placed course marshals at the major intersections before taking a corner each. I worked the far north 10k turnaround and then as the 5k started 30 minutes later moved to the 5k turnaround. Lynne and I then picked up the course, unloaded the van and drove it back to the rental office. Race one done.

Lynne then kindly drove me to the House of Blues so I could get my ticket for the night's show. It was not even close to being sold out but I wanted my ticket in hand and also knew if I had it I'd attend even if really tired from working the next event (sure Ian you was going anyway LOL) . More on concert in a paragraph or two.

Next event had me driving north to Lake Forest for the GLASA Twilight 5k. For this event I was assigned to oversee the race course and race logistics. 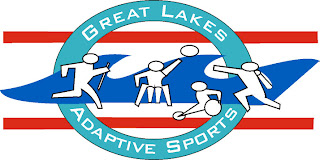 I worked this event last year for them on 2 weeks notice and was asked back for this year. With more lead in time I was able to help them more. I researched and suggested a new timing company, gave suggestions and advice on other matters. This race has a great event committee who do a ton of work to prepare for this fund raiser. As the title says it is a Twilight event consisting of a wheels wave (wheel chair, hand cycles) starting at 5:15 and then the 5k running and walking event at 5:20. I placed all the mile markers, first aid and tight corner signage on the road, worked with the timer, got the lead cyclists up to speed on their tasks, made sure announcements started on time and anything else the race organizer needed help with.  After the awards they had a big party with a local band playing. Anyone looking for a good evening late summer race on a scenic course for a good course this is it!

Time to drive back to Chicago for the concert the House of Blues by The Mission.

I had seen the Mission around 18 times (plus a solo show by lead singer Wayne Hussey) and even 3 Sisters of Mercy concerts when Mission members Wayne and Craig Adams were in that band. I sure was not going to miss this show despite working those two events. Luckily it was a late event so I had plenty of time to make it there especially given Chicago area bad traffic 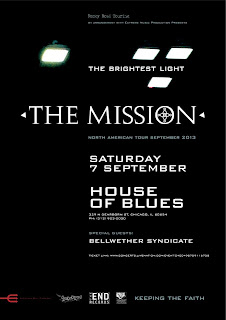 As it was I arrived at the venue before the opening band, Chicago's Bellwether Syndicate. They included Scary Lady Sarah (known for her local Goth/alternative DJing) and William Faith from the band Faith and the Muse. They played a nice set of 5 or 6 songs including a cover of a Chameleons song. During their set friends Monte and Christina arrived. The ladies of Milwaukee, Brenda and Jennifer were also in house having arrived at HOB late afternoon and using the early skip the line pass to be front and center for the show, I'd see them after the last number.

The Mission was back after a absence from touring the USA with 3 of the original four members. Only drummer Mick was missing but the new guy filled the kit very well. The new CD is due out in a weeks time (merchandise stand had copies for sale though) so the Mission opened with a new track off the new album, Black Cat Bone. I had previously heard snippets of each song on the new CD (Mission had streamed a snippet promo). This song and the other new ones they played fit in with the Mission catalog and I liked them a lot.
. 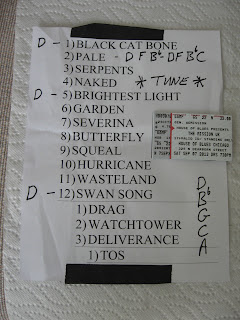 The full set list is above. The show was full of classics, old and newer. Wayne said he was losing his voice thanks to the air conditioning they encountered every where so it gave him an excuse to be drinking brandy all night "another large brandy please George". All songs sounded like the Mission of yesterday (and my first Mission show was in 1986!!). Wayne's voice was fine for the most part but Craig gave him some help on some plus the crowd joined in. Highlights for me were Butterfly on a Wheel, Wasteland, Deliverance and of course Tower of Strength. By the last few numbers the brandy was telling on Wayne but with great fun effect. One hour and 45 minutes they left the stage after a great night. 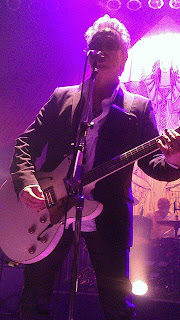 Once the stage curtains were pulled I found Brenda and Jennifer who were still stage center front row. As we was chatting and catching up a roadie opens up the curtain and passes out two set lists, Brenda gets one and another person the second one. A few minutes later he is back and passes another one which I was able to get (and is pictured above). Thinking mine is the guitar tech's ones due to the writing on it. After all those Mission concerts and over 400 total concerts this was my first set list I've got. It goes right up their with a guitar pick used by U2's The Edge I got once.

So after being up for 22.5 hours, two events, one concert and a lot of driving I got home.

What a great weekend in one day. Come back soon Wayne, Craig, Simon and Mike.