Sunday September 23rd the 4th annual Rock Cut HOBO 50k and 25k race was held on the trails of Rock Cut State Park near Rockford IL. Last year I signed up for the 25k as my first race in over 6 years. This year I signed up for the 25k again. Unlike last year I have done a lot more training but like last year I am still slow but getting my monies worth on courses with time spent on the trails.

Unlike last year the conditions were dry and warm. Last year it rained for about 24 hours the day before and even race morning on the drive north. At least last year's it was normal end of September temperatures, this year it was warmer than normal.


I arrived early and got parked up. Picked up my race goody bag which included a pair of cool HOBO socks and a Rock Cut bandanna and some sponsor items including items from Heed, Trail Runner magazine and the good people of Zombie Runners. The T shirt for this event has to be earned by finishing the race you signed up for.


The 50k starts at 8am with around 80 people but before the start I spoke to a number of friends - Scott and Caryn, Norm, Gayle, Dave, Chris, Marla, RD Larry. The horn went off bang on time and the 50k runners crossed a short section of picnic grass and turned down the trail to disappear from view. I now had an hour to wait for the 25k start. ChiA Gayle was out for a pre run on the roads around Rock Cut, think she did 7 or 8 miles. I changed into my trail shoes and removed my cotton shirt that had the awesome Brooks Clinton Lake 30 shirt underneath, grabbed my favourite running cap and strapped on my Camelbak pack that was full of water plus gels, shot blocks and Succeed caps. I was ready to run.


RD Larry said some words and we where off to follow in the foot steps of the 50k folks. Sure some of the faster 25k runners saw some of the slower 50k runners but doubt they saw the faster 50k runners like I would :-) The HOBO course is 25k (15.5 miles) of trails, mainly wider type trails but also with some great single track mountain bike trails and a little service roads plus one wide and ankle deep cold stream crossing. There was aid stations every few miles but I was a tad upset when I found no energy drink and for an ultra race going on very little food. Still there was plenty of water on my loop and has I carried a few packs of gel and Clif Blocks so I was OK. I also carried and used each hour Succeed! tabs. I walked some sections of the course but ran a lot more than last year. The single track was great and for some reason I always feel at home running on single track. Some of it was very narily with plenty of roots exposed but luckily I never fell has I had done the weekend before at Knoch Knolls. Not sure where it was but at some point Joel Lammers past me on his way to winning the 50k. About 10 others passed me including Anne and Christine who would place 1-2 in the women. Last year tons of folks passed me and a few did 50k quicker than my 25k. This year only Joel would do 50k faster than my 25k because I knocked 40 minutes off my 2006 time and almost broke 4 hours. Still slow but I was well chuffed with my time although know I can go faster, and well. I crossed the finish with everyone cheering me in and one of the volunteers passing me a bright orange long sleeve tech shirt - the one you had to earn to get. At the end Larry provides a great HOBO stew both with and without meat from all the donated veggies and beans the runners give race morning.


I sat there enjoying my veggie stew along with soda and water plus some great cookies watching the runners mainly in the 50k finish. Clinton Lake RD Chris finished and joined me at the dining table and then Marla from the CU-Buffalo (Champaign) list joined us.


HOBO is a great race on a great course with great people and draws some great Midwest runners. The goody bags and race Ts are great. If Larry can improve the aid station he'll have one of the best mid west races which is tough when the mid west now has so many great races. Next year HOBO (along with Clinton Lake, McNaughton and Farmdale) will be part of an Illinois Ultra Grand Slam created by Chris from Clinton Lake 30.
Posted by denalifc at 9:59 PM No comments:

USA played Brazil at Solider Field in Chicago before 45,000 people. Brazil won 4-2 in a good game. I had my seat near the half way line and behind the USA team bench. Here are some photos I took: 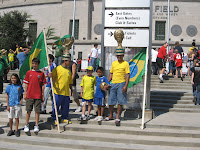 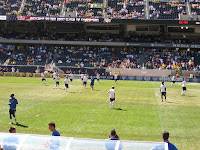 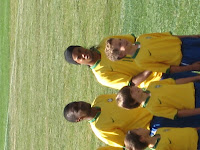 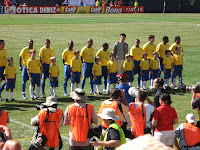 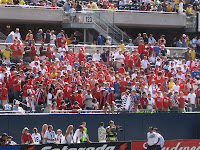 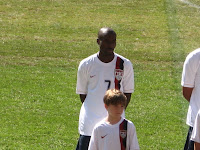 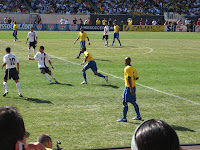 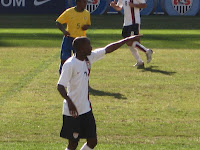 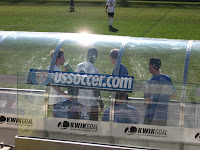 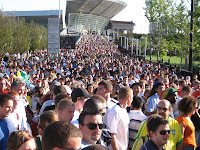 Posted by denalifc at 8:28 AM No comments:

Long weekend into the next week

Sep 1st: Saturday I hit Palos for a 11 mile trial run. Palos is an awesome Cook County forest preserve near Willow Springs. There are miles and miles of mountain bike trails - single, wide, limestone and basically no paved. Today I knew would be a busy day with bikers practising for next weekend's CAMBR MTB race. Knowing the course they would be doing I ran that loop in the opposite direction which was actually the normal flow direction for most. CAMBR is holding their race in the other direction deemed tougher by most. Come race day it is going to be tricky if non bikers on the trails even though the trails will be open to all. I know how to listen for the bikes so hear them coming and if in a narrow section step of trail, it worked fine. Palos has a number of good hills so my 11 miles was a good work out and got to see some fine biking action.

Sep 2nd: Sunday took a break and ran errands with Laura and caught up on reading the papers.

Sep 3rd: Monday - Labour Day. Got up early and headed to Knoch Knolls in Naperville. Like Palos it is all trails, wide, narrow some lime service roads but no paved. Unlike Palos it is flat but the single track is very narrow in places and twisty although visibility is good for seeing others on the trails. To get in my planned 10 miles I had to run my course I do twice although second time around I did in reserve making it feel like different trails. I love running at KK and being on the single track seems to work for me. I often see deer within the trees and that was the case this time. Also unlike Palos I only saw 3 bikers and 2 other trail runners. Unlike Palos the mosquitoes were biting bad.

So over the long weekend I tallied 21 miles all on trails. 18 days to Rock Cut HOBO 25k.
Posted by denalifc at 2:55 PM No comments:

Week late in posting this but here goes.
Saturday 25th of Aug was the scheduled monthly ChiA group get together run. This month the chosen venue was the Great Western Trail in St. Charles IL http://chiadeads.blogspot.com/ place I had not ran before. A few days before the gathering big storms hit the Chicago area causing major flooding, tree and property damage and power outages across much of the area. Run morning was scheduled for more rain so run leader Paul proposed checking the weather run morning and deciding at 6am via the yahooogroup if the run was on or moved to Sunday. It was in Naperville just before 6am so the run was called off. I watched the radar and saw a gap in the rain so decided I'd still got to GWT especially as the next day I'd have to run by home. The drive to GWT was quick and arriving at the forest preserve trail head to GWT there was plenty of cars in the car park. Apparently GWT is popular with marathon trainers. Originally I was scheduled to do a 10k race on Sunday but plans changed (see Sunday 26th) so GWT was to be 10k or 6 miles. GWT is a former rail line converted to a limestone trail for hiking, biking and running. Much of it is very straight. Right off the trail was wet and had a tacky feel to it but felt soft. Along the way to the 3 mile point I passed wooded areas, some fields and farm buildings, some residential and then the town of Wasco. The trail had small sections of water covering although most people moved to the grass edge to pass - me I ran right through the water which was no more than a few inches deep at the most. There had been some downed trees or branches on the trail but all but one had been cleared. The 3 mile marker was by a foot bridge on the Wasco border but to get the most of the incline I crossed over and then turned around for the run back. Pleased to say the run back was a tad faster than the run out so negative splits, brilliant. All in all GWT was a nice run even though a tad flat and smooth for me.
Sunday 26th of Aug I ran around my subdivision basically for a 4 mile run. Up past the single family homes that border my townhouse subdivision through the nearby office park, along 2 blocks of the Illinois Prairie Path http://www.ipp.org/ along Delhi then down Fairway residential area before getting home. All paved or concrete except for the IPP.
Sunday afternoon I attend the USA Eagles vs Munster (top Irish club team) at Chicago Fire's Toyota Park Stadium in Brigdeview IL. This was the USA last match before the Rugby World Cup which starts in France in September http://www.rugbyworldcup.com/ Not often pro rugger gets seen in the Chicago area which is probably why the crowd was a surprising 8,620. Lost of Irish club jerseys were being worn as well as jerseys for the USA. It wasn't the best game of rugger I have seen but for a friendly exhibition it had its moments. USA lead at half time but a try for the Irish club set up their win 10-6. It was an enjoyable afternoon and hopefully the first of many rugby matches at Toyota Park . USA in white, Munster in red 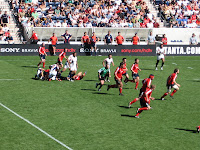 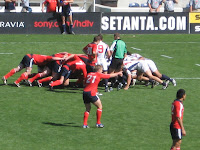 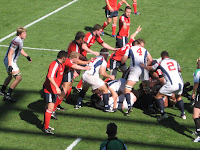 Next run of the week was Tuesday morning and followed the same 4 mile route of Sunday but this time it would be early morning so dark. As I'd be on roads I carried my Road ID Firefly red light on my water pack http://www.roadid.com/common/firefly.aspx I had got this after winning a girt certificate to Road ID at the Rock Cut Winter Trail series and Lisa Bliss had recommended them on her blog. The thing about this run this morning was being up in time to see the lunar eclipse, simply brilliant. Running along 2 blocks of the IPP in the dark was fun and spooky.

Posted by denalifc at 8:07 PM No comments: