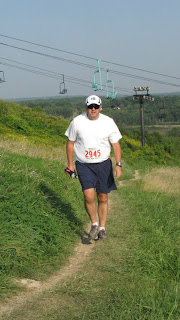 Sunday August 29th was likely the hardest most grueling short race I've done, but it also felt great and I had a fun time out there.

Every year I take in a mountain bike race. Nothing like watching folks powering 2 wheel machines on a grueling trail of hills, single track, roots and rocks. This year I ventured up to the Milwaukee area to witness the WORS race at the Crystal Ridge county park in Franklin WI.

WORS is a series of races all across Wisconsin and is apparently the largest MTB series in the country. Some of the WORS races including trail run races which kick off the days events and Crystal Ridge was one to host a trail race.

I drove up early and volunteered at runner registration and packet pick up. First person to sign up day off was, me. There was around 30 pre-signed up and a handful signed up race morning for either the 5k or 10k. Bill Stiles who had worked at KM100 Gorski aid station was there to run the 10k, nice to see a familiar face. I elected to do the 5k as I didn't want the first of the mountain bikers to be biting my heels even though they started an hour after the trail runs started. Bill went on to place second in his age group.

The start line was near the bottom of a big hill. The 10k was due to go first then 5 minutes later the 5k. Lynn the RD described the 10k course to those at the start line then they were gone, down the hill and disappearing into the woods for whatever waited for them. Us in the 5k got a similar course talk. Lynn sounded the horn and we charged down the bottom of the hill across a dirt service road and plunged into the single track. Course marshal shouted watch for low tree. First part of the course was twisty, up and down track with trees on both sides. Once we left the woods we hit a service road and started a climb up the same hill we started on but along a different track via some switchbacks. I passed a few runners on this tough section. A water stop was on top of our summit. We then descended back down a short section of singletrack and into want would be an out n back flat gravel road section that was exposed to the sun right as temperatures were climbing. Soon it was back into a wooded area and more singletrack. This track was a little bit more runnable but still twisty and up and down. Back to the exposed flatter section which off course lead us along more of the big hill, more single track and then finally we hit the straight to the finish but off course the finish was not the start and was infact on top off the hill. It was a tough climb up but I made it. My time was not fast but I was pleased with it given the grueling course, terrain and heat and humidty. I also was not last.

WORS Trail Running put on an awesome event and I honestly hope they can grow the series in both races and people attending. A BIG thanks to Lynn and her crew plus Don at WORS.

I'll be back. Thanks