Mud and more mud. That is the best way to describe at least the first half of today's Rock Cut 20k trail race held in Rock Cut State Park in Rockford. Add in the hills, heat and water crossings made for one mean tough trail race. Sort of how RD Larry likes to set them up.

Today was the fourth race in the Rock Cut Survivor Series (or WSS as some call it). The W stands for winter. I did the whole series in 2007. A 5k (Dec), 10k (Jan), 15k (Feb) and 20k (Mar). Finish all four and you get awarded a long sleeve orange cotton T shirt. You can also do a solo race. Being a winter series you can expect and normally get snow and ice and for the March one a little mud as the snow as started it's annual retreat.

Northern Illinois and much of the Midwest is currently on a record breaking heatwave. Temps have been high 70s and edging into the 80s much of the week and well be next week. Sure it has been nice but this is not ideal weather to run in especially as we've had no time to get acclimatized to the heat.

Rockford also had some rain last weekend or just before I was told and this morning way before the race started a massive downpour passed through the area. Maybe RD Larry got on his batphone and ordered that storm. I drove through rain around Dekalb and the cloud band stretched northwards. The rainbow was a nice effect especially on St Patrick's Day, not that I looked for a pot of gold at the end.

Arrived at Rock Cut, got parked easily and registered for the race. $20 gets you a race bib number, marked course, some aid on the course, some after race food and the fast folks might win money. I've already mentioned the series T shirt. Chatted with a number of friends and familiar people. Norm always as a great story to tell or tale. The guy is in his 70s and beats me every time, awesome.

Noon plus a few minutes and after some RD Larry words the starters gun goes off and we move forward, then stop within a few 100 metres as the course hits the first section of singletrack. I always start slow and tend to taper off so was at the back of the pack and in no hurry. Finally we move on only to hit another bottle neck, all part of trail running. After that wait it was all smooth sailing

Well not really smooth sailing. See that rain a week before and on race morning had turned the first 6 miles into a mud bath that any hippo would be proud of. Some was slippery, some was shoe sucking, some was water logged, some was lengthy. For the most we got through it all even if it was slow going.

Around mile four I was following behind a runner and his son when he shouts out snake. I never saw it but having seen a turtle at McDowell the day before I was not surprised, the warmth as brought the reptiles out.
We then get to the powerline section. Does every trail race have this section, Rock Cut races do and I have non-fond memories of them from the HOBO races. We would hit the powerline section 4 or 5 times but for small sections before diving back into the woods for singletrack and mud trails. At mile 5 circling above the powerline I spotted 5 vultures. Turkey vultures that is.  Nice touch RD Larry.

My favourite section of any trail runs and races is the singletrack especially those created and designed for mountain biking. Rock Cut does not disappoint. These sections were mostly dry and mud free. Kudos to the MTB crowd that know how to build trails. I was able to fly along these trails and pick up a few places which was good as most of the MTB trails were at the end of the race.

I had a goal going into this race. Break 3 hours. Sure that is slow compared to the folks up front but would be good for me. The mud and the weather prevented that plus the lack of training this year meant I knew I would not be close so my second goal was to beat my time at the same race back in 2007. Of course the conditions were a lot different, sub in snow, ice and some mud in 2007.  Good news I bettered that time by just over 30 minutes. Given the heat I was very happy.

But back to the finish. As I got closer to the finish area I could hear lots of noise. Rounded the corner and saw a lot of folks wearing their orange series finishers shirts. Awesome sight. I ran past the car park and up the hill to the finish line with people cheering me in (thanks Julie B and Carol). Hit the stopwatch. Done.

Quickly refilled my bottle with cold water and grabbed some chocolate brownie like cookies. Talked to Larry who missed me finishing, he's a busy guy. Head back to the car and run into Norm and family. Norm's wife Joyce had finished her 5th WSS and was awarded a WSS hoodie and a lovely cake. Congrats Joyce. It was good seeing Kat back out on the trail. My legs were covered in drying mud, everyone's were. Grabbed a towel, clean socks and shoes to head to the lake to wash of the dirt and cool down, Hmm felt so good. Time to head ho me.

Larry's race get better each time. They are still grass root but something improves each time at the Rock Cut races. This time RD Larry had used surveyor flags as well as the famous pie plates to mark the course and corner. As well as the turns being marked with the plates there was a "corridor" of flags and at regular intervals along the trail flags used as confidence markers to know you was still on track. Nice touch.

Congrats to everyone that ran today, it was a tough mudder for sure. Thanks to RD Larry and his crew for all the hard work and big thanks to the volunteers. Those that got their orange shirt, wear it with pride. 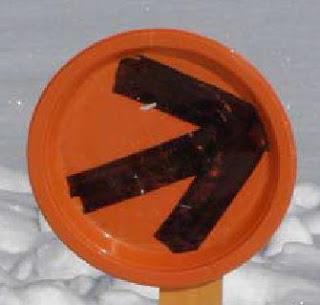 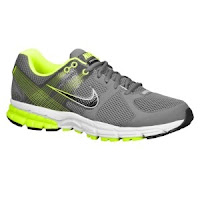 Sure my blog is titled Running Off Road and I prefer to do most of my running on trails. But sometimes there is no time to head to the trails so I'll run on the roads around the neighbour.
It was time for new road shoes.
Last year I spent six months volunteering in the Chicago office of the American Liver Foundation working on various aspects of their marathon, golf, and walk fundraisers. They surprised me with a really nice gift card to Universal Sole running store.
US are one of the top running stores in the Chicago area with expert staff. They are located in the Lakeview area of Chicago plus a small store in the Chicago Loop. I don't make it to Lakeview much these days even though I used to live there. This week I had a Crew meeting with Clif Bar to discuss the events for the up coming year. That meeting was scheduled to be within 2 miles of US so I had the opportunity to combine both into one trip especially as my work day was 4am to noon (special project).
Was greeted at US by Jessica. I remembered Jessica from the Loop location when I visited with Joe from ALF. She asked me a bunch of questions about my running and checked out my foot plant. I tried on a few pairs of road shoes and decided to go with a pair of Nike Zoom Structure Triaxs (15). This was a surprise as I had not worn Nike's in around 15 years. I set my marathon PR in Nike's and the only time I've broken 4 hours in the marathon (I've done 9 marathons and 5 50ks). Back in those days I discovered Nike changed shoe design every six months, or so it seemed so I swore off Nike when the marathon replacement with the same model felt so different. Have to admit most running shoe companies seem to do the shoe design change way to often and quickly but Nike were the first one's they I came across.
Of course running shoes should NOT be purchased based on colour or price or model but by what works at the given time for what your goals and plans are.
I am happy with my purchase which thanks to ALF only cost me the tax. Now to see how they run not on a treadmill
Thanks ALF, Universal Sole and Jessica. 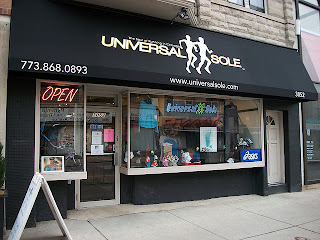 Photos copyrighted and borrowed from Nike and Universal Sole
Posted by denalifc at 3:03 PM 2 comments: