I signed up for Clinton Lake. Did one loop of the 3 loop course this year. Guess I'll do 2 loops next March. Shooting for all 3 loops

http://www.secondwindrunningclub.org/Clinton/Clinton.htm It will sell out 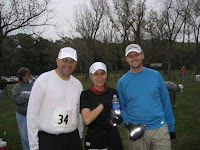 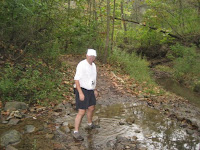 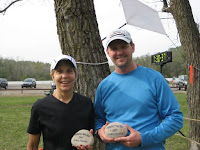 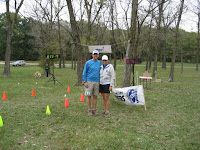 Photos courtsey of Kelly Roe (Me, Gayle, Brian: me at a stream: Gayle and Brian ultra finishers: Brian and Kelly)

Waking up very early on 13th of October I set off to drive for 3 hours south down I-55 to run an 8 mile trail race near Peoria IL. Along with the 8 mile race was a 33 mile ultra. Both events in their second year were sold out and to quote the RD "the park ranger had gone home to get a camera because he had never seen the car park with so many cars"

It was pitch black dark when I finally got there with a light drizzle as I pulled into the said car park with only about 8 other cars present. Walked around the start area but had no packet to pick up because ChiAdead Gayle who was doing the full 33 miles had kindly picked it up the night before. The other members of the ChiA's Kelly and Brian got there before me but I only spotted Kelly after my mini stroll. Brian who was returning from a few foot injuries had done the Chicago heat-athon with Kelly the weekend before but was looking for another long race before he tackles the Chicago Lakefront 50 mile on Oct 27th. He had emailed Dave Tapp the RD and was probably the last person to enter by overnight his race app plus Kelly an app for Kelly so she could do the 8 mile before crewing Brian. Friend and ultra runner extraordinary Bonnie surprised me by being there but lay the blame for her being there squarely on my shoulders. I think Kelly was saying the same and maybe Brian who all heard about Farmdale from my post to the ChiA list. I introduced Bonnie to Kelly and Brian and I think to Gayle who arrived a tad later.

Gayle gave me my packet and also for the 3 ChiA she had baked a cinnamon loaf for each of us. Thank you Gayle, it was awesome. The ChiAs are so talented - well some of you!!

The race started at 7.30am. RD Dave gave race instructions and thanked the sponsors. Both the 8 mile and 33 mile was basically the same trail but the 33 miles would do 3 11 mile loops that included two detours of the 8 mile loop and we was told it was well marked.

As this season as gone I started slow and tapered off. Soon Kelly, who had decided to run with slow poke Ian to rest her legs from the Chicago heat-athon and because she was headed to Mexico the next day, and I found ourselves at the back with only 2 people behind us and a few just ahead of us. We headed on mass done the Cinder Road and before a creek crossing (where we saw two deer running by) we headed into the first of much single track that went straight up hill. Most of the single track at Farmdale was built and maintained by PAMBA and they do an amazing job. The trails were banked at the right spots for MTB, had some great twists and turns as well as many log jumps. After my 8 miles I wished I had brought along my mountain bike. Most of the Farmdale race course was single track and wide track but no paved or road crossings. We encountered a couple of stream or creek crossings but none were deep, the bigger was barely ankle deep. The trails were actually very dry and dusty and due to the lack of rain were hard packed. We got to the first 11 mile detour and got to see some of the fast guys pass us and that gave time for Brain, Bonnie and Barb (who crewed Bonnie at Badwater) to "catch" up to Kelly and I which also gave Kelly photo ops. I think Kelly filled a memory card on the run because there was so much to photo including the runners and the scenery. I think it was after we left the first aid station we hit a big down hill section that once I got used to I ran fairly fast or maybe that was the faster ultra guys breathing down my neck. At the end of this downhill was a sharp turn to the left to remain n single track except Kelly and I were not paying attention but focusing on some runners ahead so we followed. Soon we all arrived at or nearly at a river crossing and knew something was run when a runner was spotted on a trail across the over side. Thinking back I believe 3 guys running together missed the turn and Bonnie and Barb followed them and so did a fellow 8 miler then us. In all my guess is we went half mile out of the way and then had to retrace the half back where off course we saw the clearly "if you pay attention" course marking. Lesson learned. Kelly and I continued on and after passing the last aid station twice via a loop we headed for home. We crossed a dam or was it an old rail bridge which was totally exposed, thankfully the day was nice, up a short hill and then along the last section of rolling single track. Finally I spotted cars through the trees and heard voices. Kelly and I picked up the pace which wasn't that hard and crossed the finish line almost together. I got the honour of a DFL which equals more time on the trail and therefore better value for money - well I am saying such. A volunteer placed finisher medals around our necks and another took the bib pull tag.

Dave had organized a great post race food tent, dogs, soup, chili, sandwiches including veggie ones, salted snacks, cookie including homemade ones and water and coke. Kelly and I sat at the picnic tables with other 8 miler finishers and watched the ultra finish up loops. Brian was sending a few text messages from the course. He missed the same turn as Kelly and I even though he had got it right first time and then later when he was maybe 30 minutes out he text Kelly and asked her to pace him on his last loop. Kelly being the troop got ready to roll and when Brian came in or his last loop Kelly took of with him. Around that time Gayle and Bonnie went through. Finally the winner from Aurora IL (not far from home) finished and not much later Marla crossed the line to beat her 2006 time by a fair margin to win for the second year in a row for her 5th or 6th win this year. Before Marla had finished I got to speak to her father for about 20 minutes, nice guy. Chris finished his race and by that time it was sadly time for me to head home. I'd like to have seen Gayle, Bonnie and Brian finish but had to get on the road. Before getting to the expressway Gayle called to say she had finished and was heading to her hotel.

Farmdale is a great race on great trails pout on by great people. Thanks Dave and crew.

I'll be back (and hopefully faster)

Photos at: http://picasaweb.google.com/kellyaroe/FarmdaleTrailRunOctober132007/ (by Kelly Roe)

Posted by denalifc at 8:53 PM No comments: