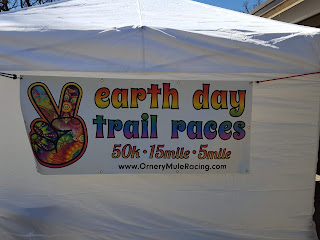 Two days before the actual Earth Day Crystal Lake, a suburban in Chicagoland's northwest, held the annual Earth Day Trail Races. The MUDD runners group under direction of Ornery Mule Racing and race director Michele Hartwig have staged this race with distances of 50k, 15 miles and 5 miles for around 7 years.

By Chicago area standards this is not an easy trail course due to the hilly terrain. It is a nice mix of single track and wider trails. Among the hills are sections of flat but one has to be careful to keep an eye on the surface.  Each loop is 5 miles long so those doing the 50k have to do six circuits of the course. 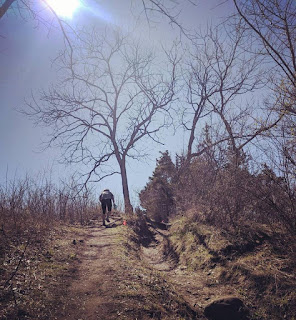 I arrived early to volunteer at packet pick up. Many of the runners had picked up their supplies the night before but there was a steady flow of runners this morning. We had two tables set up divided by the three distances with a couple volunteers assigned to each distance. As the 50k was the biggest race they in fact covered one whole table. Runners supplied their name, the bib was pulled from the box, a nice reusable tote bag was given with a nice race shirt and other goodies and if they had ordered one a cool hat. There was also a supply of packets of wildflower seeds. Kim K was running the merchandise table where people could buy hats, buffs and sweat pants while they looked over medals and buckles for other Ornery Mule races. At the door was myself and Debi H guiding runners to the right race table line and answering questions. Race sponsor Running Depot had a table of display shoes and other running accessories set up.

As the race started promptly at 8am Debi and I stepped outside to view the race start from a little distance. From where we were you could see the race started with a down hill. Yep a true dirt trail race which always seems to start up or down hill. Back inside we boxed everything up, loaded up a van and it was driven the short distance to the finish line. 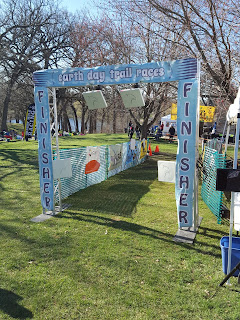 The start finish line area was a hive of activity and set up. Beside the finisher arch and chute was tents for timing, a well stocked aid station and a few sponsor pop up tents. In the pavilion a grill was fired up to provide runners with food. Kim ran the merchandise table again while Debi and I manned the finishers awards. 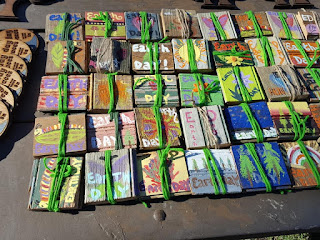 What race gives hand painted finishers medals from reused wood? Only Earth Day Trail Races. As each runner finished their race distance they got to choose whatever finisher medal they wanted. All had an Earth Day theme. Overall and age group awards were also made out of wood and really nice looking. 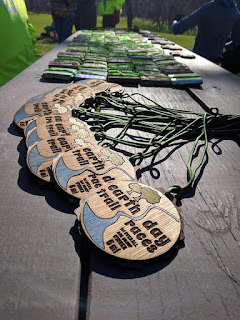 It was a joy to watch all the runners conquering the loop course as they came through the start/finish line area some heading out for another loop others done for the day. Sadly I had to leave before the 50k winners finished but did see the 15 miler winners. 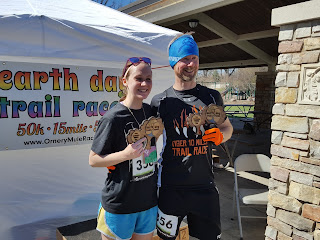 It was definitely a fun morning hanging out with Ed, Michele, Debi and Kim plus many others including Brandi who is such an inspiring ultra spirit. When I got home while working on some college papers I followed the Facebook postings seeing who had finished.

Ornery Mule Racing has a few more races in next two months. The Galena Trail Sky race in May and then in June they put on the famous Kettle Moraine 100. Hennipen 100 follows in October with plans for a couple other possible trail events in the works 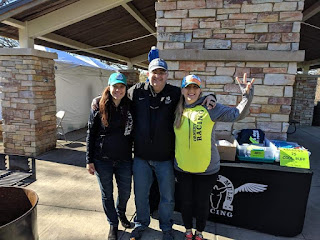 Photo from Kim's collection. Debi, myself and Kim 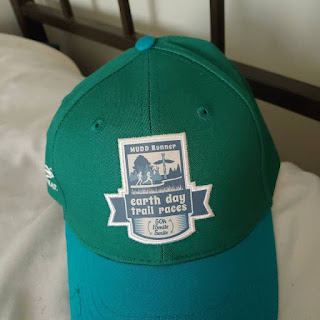 The hat in my volunteer tote. Photo by Art R

Race results will be at https://ultrasignup.com/results_event.aspx?did=59148