I was going to title this six hours for a 5k. Guess you'll see why


My friend Tom told me about this race last year. A 5k race on the limestone trails of DuPage Forest Preserves Fullersburg Woods in Oak Brook IL. 2009 was it's second year. Tom's race, the Oak Brook half marathon, uses 3 miles off the trail including the hills so Tom helps them with this race. As I spend lots of time running and hiking the trails of various DuPage Forest Preserves I knew I wanted to do this race as the proceeds benefit kid's nature education the nature center provides.

After signing up I knew I might have to make an event out of the event and ended up walking a mile from home, taking the train to Hinsdale then walking another 2 miles to Fullersburg. Due to timing my journey to the Metra schedule I arrived at the race with a full hour to spare. Picked up my bib number and a nice hot chocolate colour long sleeve tech shirt which includes the logo at the top of this report (wished the logo had been a full size one not the smaller pocket location size but that is my only race improvement suggestion!!). Chatted with Tom a little then with a race volunteer named Bob who seems to help at races and walks every weekend and is a great volunteer.

It wassoon time to line up for the race. The start line was the edge of a wooden fence marked with a yellow ribbon. Around 120 people where in the race plus a few dogs. I lined up middle pack which was still close to front in a small crowd. Forest Preserve ranger said a few words and then the start gun was fired and we was off. Having run/hiked these preserve in the past I knew it would be scenic but if you run the same trails they can have a totally different look throughout the year as was the case with Fullersburg. The race ran along the limestone paths that paralleled the Salt Creek river on both sides using the preserve bridges to cross at each end of the course. I soon found myself maintaining a steady pace as the field spread out. At times people would pass me and I'd pass others including a bulldog. Around mile 1.5 we encountered a small hill which I ran up, no stopping - the summer hill repeats paying off. Just after mile 2 we past the Graue Mill Dam built in 1935, crossed the river via York Road and turn to pass Graue Mill/Museum built in 1852 (info from Fullersburg Historic Foundation flyer). Now we hit the only paved section of the course for about half a mile but still on the river bank. Back to limestone when a turn onto a trail covered with wood chip and the finish line was in sight. I crossed feeling strong with fairly even mile pace. My time was not fast but there was still plenty of folks behind me.

Hang around for the awards, some fast times then left for a 2 mile walk to the train i9which was 10 minutes late)

The DuPage Forest Preserve had put on a great little running event. This race has room to grow which the right marketing and earlier sign up announcements. The course is great, the T shirt was nice (although make the logo bigger), after race refreshments were just right and the awards was very good, not that I win awards. 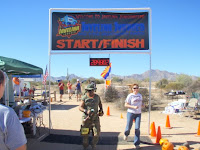 Photo: Steve finishing JJ100 2009 with his wife Toni. In the background Mike Hanes, Steve Hanes and myself

Last year my good friend Steve set out to complete is first 100 mile race, the Javelina Jundred 100 in Phoenix AZ. The race is held on the full moon nearest (or on) Halloween encouraging the runners to get dressed in costume. That year Steve ran has Pancho Villa. Steve got to mile 92 before missing the cut off for the last loop by 14 minutes.