Year three of the Des Plaines River Trail Races held in a north suburb of Chicago.

Year three that I have done one of the races

And as each year goes by the race gets better and better.

Two years ago this was my marathon come back race. It was held in May that year, 2010. In 2011 the RDs moved it to October and I did the half marathon as well as helping race morning a packet pick up. 2012 saw me doing the same again.

Unlike 2010 and 2011 I did basically no training this year. Sure I had plans for this year but life gets in the way at times so I did what I could for training but due to work and a touch of summer bronchitics it was not much. No worries I'd make the race a training run and have a good time watching other runners tear up the course on a very nice day.

RD's Ed and Terry are both Badwater, Marathon des Sables and multiple other ultra races finishers. A few weeks ago Terry directed a 165 mile stage trail race in the southern Utah and northern Arizona that received rave reviews  http://www.g2gultra.com/ Having been part of DPRT I am not surprised about G2G.

I offered to work packet/chip pick up before running my half. It meant an early morning as race HQ is an hour away from home. Arrived around 5.15am and helped Ed set up a few things before moving over to bib and T shirt pick up. The first 50 milers arrived right at 5.30am and then a steady stream followed. A great crew of volunetters had been recruited and we had very few lines despite a total of over 500 runners between the three distance (100 in 50mile, 200 in the marathon and 200+ in the half). I picked up my T shirt and bib before it got busy and then collected my timing chip when I was handing out chips.

Each race started on time and each race did a 2.5 mile out n back loop to the south and back to start before heading northwards to our respected turnarounds. For the half I lined up near the back but was still across the start in around 17 seconds. I don't think I had a good start but that was to be expected and given that I knew I could finish even if it was ugly and slow I plodded on and on. Each time I've ran this trail I marvel had how scenic it is. I also think I need to return to explore the other trails that go off from the main trail including some grass and dirt trails. Given a large number of intersecting trails Ed and Terry did an amazing job of marking the course with arrows, wrong way signs, mile markers, aid station ahead warnings. No one got lost nor should they. The aid stations were every 2.5 to 3 miles on the half course and everyone had been warned to carry a bottle or pack. Unlike big city marathons that water every mile or so DPRT are spread out like a big time ultra. DPRT is getting to be a big time race.

I loved seeing the fact marathoners come back and then the half runners. Seeing the half runner meant I was close to the New Leaf ultra group aid station. There was a number of NLUR there to greet me which of course meant it was time to hang around for a little. Sure it add around 7 minutes to my time but I was there to have some fun and enjoy the race. After taking in some coke, Brandi's famous vegan brownies I turned and left for home and the medal that awaited me. I knew it would be a slow time but as the miles went by I kept a fairly steady average pace with some walking breaks. My goal was just to finish. I guess another goal was to beat last years time but as I knew that would not happen I just went for a sub 3 and got it.

Another goal was to finish before the first 50 miler finished. They started 2 hours before the half so totally knew that would happen  but some of those 50 milers are fast. Upon finishing Ed presented me with a finishers medal to go with the awesome long sleeve black race T shirt. 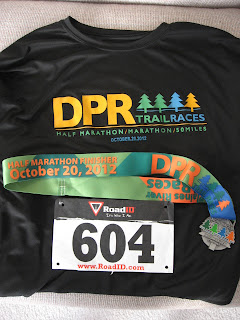 Got a post race meal, found some MUDD/NLUR friends who had either ran, crewed or cheered runners while waiting for the first 50 miler finish. We all wanted to see Oswaldo Lopez finish first. Oswaldo won Badwater in 2011 with  MUDDer Juan Juarez crewing him. Juan had got Oswaldo to come to Illinois to run DPRT. The wait soon paid off with Oswaldo finishing in first place smiling as he finished.

Oswaldo hung around to get a meal but also to chat with all and pose for photos. Sure was a pleasure to have Oswaldo come to Chicagland and run the race. 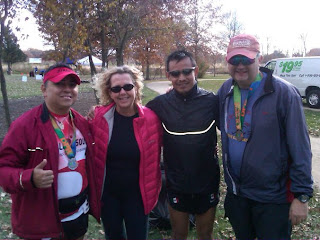 Next year I will training, not just for this one but for all. DPRT is highly recommended.
Posted by denalifc at 9:20 PM 2 comments:

My next race is only a few days away, the Des Plaines River Trail Races on Saturday October 20th. I am doing the half marathon but also offered is a marathon and a 50 mile ultra. Care to join the fun? Website to sign up is http://desplainesrivertrailraces.com/ The course is groomed limestone trail which is flat for the most part and follows the namesake river through the woods and meadows.

If you get there before the half starts I'll also be working packet pick up so say hello.

After that shooting to run some of a 32 mile fun run at Deer Grove with my ultra running groups. I'll be happy with 3 of the loops completed.

Week later is the Universal Sole Trail Challenge, 5.3 miles along another section of the Des Plaines River Trail system but in Cook County and nothing like the paved Lake County section. This one will include dirt single and wide track and maybe even wet feet if the creek leading into the river is up.
https://www.signmeup.com/site/online-event-registration/86478
Posted by denalifc at 10:24 PM No comments: