As readers of my blog know I have a certain love of trail running and ultra races. OK my 2 or 3 readers. A number of race stick out in my mind as must be at such as Western States 100, Badwater 135, Ice Age Trail 50 and Javelina 100. I have either crewed, paced, volunteered or vacationed at all of these. Just something about them.

Over Halloween weekend I headed back to Arizona to crew for my buddy Steve Ochoa at this year's Javelina. Steve who lives about 45 minutes from the race site has completed the 100 mile 3 times and done the 100km as well. I have crewed/paced him 3 previous years and was excited to be back again. This year Steve was doing "just" the 100km. Yes 62 miles.

I arrived in Phoenix on Thursday evening giving us some time to talk race tactics including setting up a camp site, planning a trip to the race expo, last minute shopping and then getting to race HQ bright and early Saturday morning.

Race HQ at McDowell Preserve just outside Fountain Hills opened Friday at 7am for runners to set up tents and pop up canopies for the race weekend. Pop ups are free but there is a charge for the tents. The RD creates specific areas for where tents and pop ups can be placed as well as areas for rental tents, RV parking and car camping parking. There was also a race lane marked out which was a giant loop through the city that sprung up, sort of a parade loop done out n back each loop. Steve's set up consisted of both a pop up at front and a tent behind. We had some comfy lounging chairs, tables, coolers and inside the tent a sleeping cot. It was a similar set up to last year although due to a change in the HQ layout we moved slightly down the hill but hit a perfect spot. 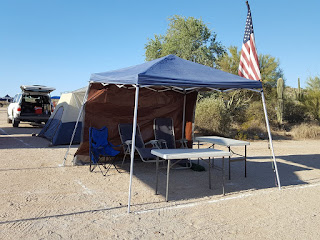 After set up we headed to Denny's for a pancake breakfast and a lot of coffee then drove over to the race expo to get Steve's race pack and check out the race vendors and store. I got a couple JJ shirts including a "Let's Get Loopy" crew shirt. Most the vendors were race sponsors including Hoka One One, Run Far, iRun and Huss Brewing amongst others.

There would be two other runners and crew sharing our site, Scott Jacaway and David Simon. Scott and his wife Caryn meet us at the expo. Steve and I had previously crewed Scott at Badwater 135 along with Caryn. We would not see David until race morning.

Got to chat with the JJ race announcer Jubilee and saw RD Jamil. Catra Corbett was volunteering at the expo before running the race which was just a few weeks since she did a 240 mile race in Moab. I have meet Catra a number of times so we chatted for a few minutes. She is a very popular ultra runner who is working on a book about her life; can not wait to read it next year. 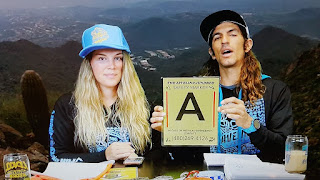 After a stop at Steve's house we hit a nearby grocery store, Winco to get supplies for the race. As crew I needed food and snacks but unlike last year I kept my supplies low instead of having to fly home with most of it, plus I had my favorite race food with me already. After that we all headed to a Chicago style restaurant for prerace carbo load. There was plenty of vegetarian fare on the menu for me.

On to race day. Steve's race started at 7am but as Scott was driving us to HQ with a 6am start we left at the crack of dawn, actually it was hours before dawn, arriving in plenty of time to finish setting up the remaining runners and crew supplies. Scott headed to the start line which was basically 200 meters up the path giving Steve and I a great viewing as the 600 runners headed out on the 100 mile course. David arrived for the 100km which started just one hour later but in daylight and not darkness like the 100 milers. 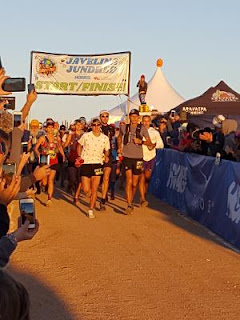 With all 3 runners on the trail plus plenty of other friends and folks I know (Jeni, Leah, Jen, Catra, Willem, David, Art and others) I decided to suit up and head out on the trails myself. My original plan was to head to the last aid station so I could fill up my water bottle although it was further than I wanted to go given I planned to pace Steve at night. The runners do five 20 mile loops. Well the first loop is 22 miles due to an extension on the green trail after that last aid station, with each remaining loop 19.5 miles. That meant I could run the blue trail out n back and not see many of the runners so not getting in their way 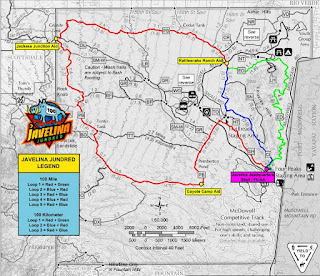 My run from race HQ (purple block) along the blue trail went well but around 2.3 miles in (AS was 3.7 miles away) I spotted the Pemberton trail head parking area and seeing a brick building ventured over to see if they had water. Once I got there I realized I was at the former JJ HQ staging area and yes there was water fountains and real bathrooms. I'd not need to go to the aid station now. Leaving Pemberton I headed a little further on the blue trail before turning around into the sun back to JJ HQ. The trail was awesome and scenic, all desert, mainly single-track with plenty of cacti and bushes I'd not see in Chicago. 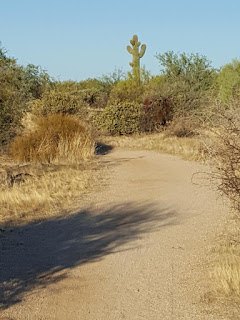 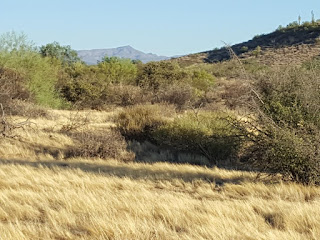 As I got near the end of my run I crossed path with the first 4 runners including last years winner Zach Bitter who wished me a good run after I had called out to him. The third place runner HOKA's Patrick Reagan asked me how far ahead Zach was. Of course they still had almost 80 miles to go and yet it was race on.

With the hours going by I watched runners passing the crew area. Scott was first to arrive back, followed by David and then Steve. Once they were feed they headed out for another loop. Steve had plenty of time so took a short break to get over the heat from the first loop and change into lighter gear. Also coming through was friends Leah and Jen who were doing the 100 mile and Chicago's Jeni 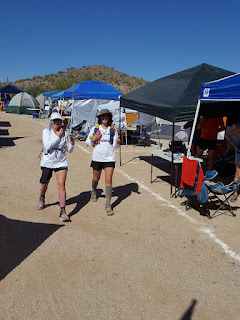 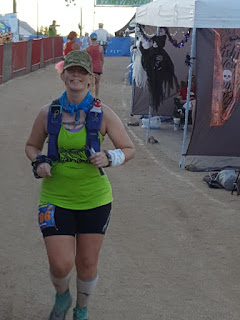 Around noon David's wife, Shannon arrived. She was going to run with David on his 3rd loop to bring him home but first she delivered me coffee (yes Starbucks does deliver!!), thanks Shannon and we then hit the race store for merchandise followed by ordering a cooked on site vegan pizza from Freaky Brothers and a Javelina Joopy IPA from Huss Brewing, hmmm There was also a coffee vendor on site who I had ordered from after my run plus a smoothie/Italian Ice vendor. No crew would go hungry!! David's parents arrived a little later with David and Shannon son who was staying with them and a surprise guest visit by Gilbert who used to work with Steve and had helped me crew and pace Steve back in 2009. Awesome to see Gilbert again.

It was getting dark when David arrived just before his family would leave. Shannon got ready and headed out with David for her 19.5 mile loop. Steve's wife Toni and Scott's wife Caryn had also arrived around same time as everyone else. And my friend Jeni came through to complete her second loop. Like Jeni first loop I got to escort her through the parade loop back to her race site. It was a joy helping her get set for her return to the course. Jeni was heading out alone on her 3rd of 5 loops but she had pacers lined up for loops 4 and 5, her mother and her father-in-law.

Scott got back after 2 loops but had made the decision to drop from the 100. He was having feet issues from wearing old shoes during the week plus he had finished the Hennepin Hundred just 3 weeks before. We then heard via text that Steve was having a hard time due to the heat and was planning to drop when he got back although he was far out at the time. I was actually at the Squirrel Nut Butter HQ visiting my friend and Hennepin RD Michele when Steve got closer to retext us. Michele was preparing her runner to head out on course then we got to witness Zach Bitter finish his race in 2nd place. Spent a little time chatting race business with Michele. She has big plans for 2018 which I am excited about.

Back to Steve's HQ to find Toni and Caryn had gone for a walk along the trail to meet Steve on the course. Grabbing my headlamp and light I headed out to catch them up. It was fun being on this section at night. Seemed to be a bit more technical that my early morning trail run and not as flat but still very runnable. Got to see a number of runners in this section. Finally caught up to Steve about a mile or so out with Toni and Caryn so we escorted him back to HQ making sure he completed the full parade loop before declaring his drop to the timer.

Although Steve did not complete the 100km he still got in 42 miles for an ultra distance. Nothing to be upset about. Steve knows he can complete this race as he has done in the past and a few weeks on is already talking about a return in 2018.

Like we did last year we all headed back to Steve's house for a full nights sleep and showers. Toni prepared a awesome post run breakfast to refuel us and then it was time to return to race site to pack up camp. We got back just after the last finished in the 100 mile had buckled. Much of the race HQ looked different due to many already having left.

Jeni had completed her 100 mile journey a few hours before so sadly I missed her finishing but we texted each other. So proud of Jeni finishing her first desert 100 mile (not her first 100 though). You can read her report here

David paced by Shannon on loop 3 completed his 100km in a personal record time.

Monday I sadly left Phoenix's warmth to journey back to cold Chicago. I have done this return trip before but this time I really didn't want to come home (although I was missing Laura). But I will be back to Javelina for sure.

These days there are many well organized ultra races and Javelina is easily on the list. The organizers do an amazing job from sign up, info, expo, race set up, course management, awards and more. The course for the most is very runnable although there are some narily sections. It can be warm even hot, it is Arizona after all, and the course has zero shade. If a runner, newbie or vet, is patient on the 1st and 2nd loop they can do well on the course as Jeni found out and Steve has over the years. Highly recommended 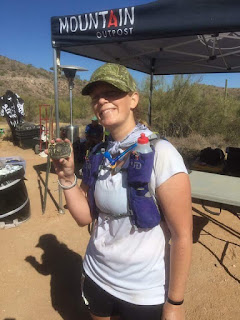 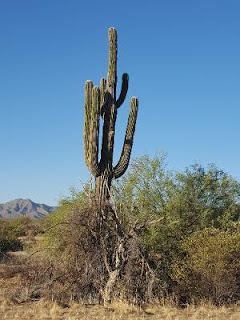