Back from an amazing experience crewing for Scott Jacaway at Badwater 135. I'll write a longer report soon but Scott finished in 51hr 33mins. All Illinois runners finished the 135 mile journey from Badwater (lowest point in western hemisphere) to Mt Whitney portals (trail head for the highest point in lower 48). Congrats to Scott, Nikki, Jerry, Brian and Tracy plus Bonnie from nearby IA (proud to say I know them all) and big congrats to female winner and friend Lisa Bliss of WA, formerly IL.

Photos courtesy of and copyrighted by Chris Kostman, Badwater.com and Adventure Corp 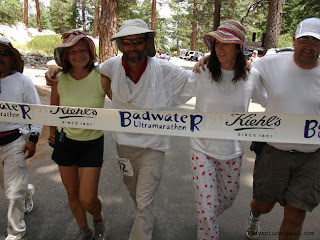 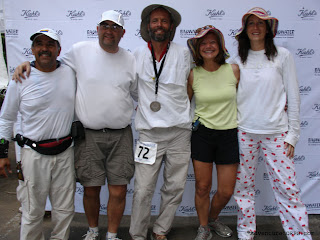 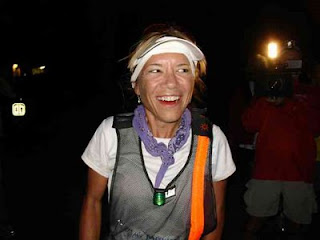 Last Sunday (15th) I did my first double work out day in many many years. In the morning I went to Knoch Knolls park in Naperville and did 5 miles of trail running then later in the afternoon after running errands (well shopping at REI) I stopped at MT Hoy in Blackwell Forest preserve and meet up with Scott Jacaway and his wife Caryn who were doing hill repeats. They were already repeats ahead of me so I just joined in and got in a quick 10 I think. Scott finished up his 20 climbs in fine shape. Normally I hike up and down but training with Scott this time I started running down the steep hill and have decided even after Badwater I'll be back at Mt Hoy for hill training to get ready for the HOBO 25k.

Saturday was a no running no training day. Laura does volunteer work for the local chapter of First Book. These organization raise funds and supply book for children in less well off areas (Fox Valley and Aurora for this chapter). Jewel was hosting a NASCAR event due to the race at Chicagoland Speedway in Joliet so First Book and Cheerios tied that event into a Speed Read to raise book donations. Celebrity and a YMCA kids took turns to read. In total over 10,000 book donation were "won" on the day and then at the race the next day another 11,000 books via laps doe by the Cheerios racer
Posted by denalifc at 4:02 PM No comments:

In the heat of the day

This past weekend (July 7 and 8) was hotter than it had been so I decided to take good advantage of the sunny skies and rise in temperature. Saturday I headed out to nearby Herrick and Danada Forest Preserves in Wheaton. There are about 10 miles of wide limestone trails at these two connected preserves and is also home to the Windrunner 10k held in August (26th) . Around 75% if the trails are unshaded and exposed on a sunny day, the rest travels through wooded areas.

Setting out from the car park around 10am I decided to run the shaded sections and hike the exposed sections to maximum my time in the sun and heat. The run/hike went well and I felt strong for the 9 miles I did despite the sun. I made sure I drank regularly from my Camelbak Rogue, what a great purchase, and took in a couple Hammer gels and some Succeed! caps at varies points. In all it was a great run/hike.

Sunday I got to sleep in more than normal. Laura and I went grocery shopping in the morning, watched Le Tour de France London to Canterbury although didn’t see my sister or my uncle who both live in that part of England. After lunch I headed to Blackwell forest preserve, just north of Herrick (linked by a trail and road crossing). I arrived around 1.45 and went to the Mt Hoy car park. The temperature was 97F in the city and even hotter in the burbs and I was about to start some hill repeats on the biggest hill in Du Page county. It is approximately 100 feet of elevation gain from the base of the hill on the grassy slope to the summit and some sections are fairly steep. After a number of treks up and day with the sun blazing on me Scott (the Badwater runner I am crewing for) and his wife Caryn showed up. Scott had planned to do a total of 20 return trips which he did with easy. I completed my planned 10 and was pleased with the effort. Caryn I think did 10 or more and then hung out with me to chat while Scott finished up. A lot of water and energy drink was drunk by the 3 of us. I was surprised to see others out there on the hill, most only did one trip to the summit and right back to their cars, while one chap was doing multiple loops and a high school football team was doing some training in preparation for the season. Often than that compared to July 4th Blackwell was fairly peaceful.
Posted by denalifc at 1:37 PM No comments:

WOW, little behind on my blog entries so let's play catch up and post something about last week.
It'll include a little something from:
June 30 ChiAdead Run at Poplar Creek
July 1 trail run at Knoch Knolls, Naperville
July 3 and 4 runs at Springbrook, Naperville

The ChiAdead monthly runs was "created" recently by Brian Gaines and what a great idea. I missed the first venture out to Water Fall Glen end of month but was very happy to make the end of June run which was being held at Poplar Creek Forest Preserve near Bartlett IL, http://www.fpdcc.com/downloads/pc_trailmap.pdf. I made he short drive up Rt59 and was greeted by Michael, Debbie and Paul. Soon after Kelly arrived and we then discussed the route to take. Kelly had ran here before so in Brian's absence took the lead role. She suggested starting on the 2.6 mile dirt/grass trail loop and then do the large 8.9 paved trail. This was to my liking although I think for most the others, except Kelly, it might have been their first time on a dirt trail. For the most part it is mowed grass, some dirt almost single track and a few rock, roots and rutted section with barely a hill amongst it not to say it is flat. Some of the trail is in the woods and at other points there are some great meadow views. We all ran as a group for this loop although near the end Michael who was running extra distance disappeared of into the distance. Back at the cars Paul and Kelly were ready to do the big loop and Debbie intended to do part of it and turn around. I wanted to do a total of around 8 miles that day so rather than doing the big paved loop opted to do 2 more dirt loops. For my second loop I headed out in the opposite direction and then the original direction for the third. On the third I decided to explore an off shoot and discovered a nice little hill plus a mini lake with an egret on the waters edge. Start of the 2nd loop a deer crossed my path then stopped to stare at me. Meet up with Debbie and Michael who had both finished their various mileage and shortly after Paul and Kelly came running in. Breakfast plans were made but sadly I didn't have time to join them so set of for home with the heater on in the car!!!

Sunday it was off to one of my favourite dirt trails, Knock Knolls on Naperville's southside. Although most of the trails here are flat there is a great mix of single and wide trails. The single trails are really twisty but have a fair share of rocks, roots, logs and deers. It takes a few trips in KK to get used to the trails and where they go but I've "designed" a few different courses to run and sometimes reverse them for a different view. Total mileage was around 5 miles (there are no real maps or mileage posted)

Tuesday I had an extra day off work so what better than to go for a run. It was forecast to be a sunny day with increasing temperature so I got to Springbrook forest preserve http://www.dupageforest.com/maps/springbrook.pdf around 11am. Was surprised to see a fair number of cars parked at the trail head. There are a basically two loops at SB, the big 5.5 main west loop and around 4 miles on the other side of Plainfield road. The 5.5 mile loop is limestone and totally exposed, barely a tree on the trail. I wore my Camelbak pack and headed out clockwise. It was a fun trail to be on with views across meadows galore, but of course box retailers were also visible at times. After I went through the tunnel under Plainfield Rd I turned right onto a dirt trail to explore at least part of the east side. A wrong turn at an intersection lead me to the end of a trail with another meadow view but this was surrounded by trees and no cars could be heard. Went back to the correct trail and continued for a mile or so before turning around to go back and finishing the big west loop. It wasn't long before I reached the car after around 8 miles with plenty of sun and heat. Couple things sort of surprised me: most runners were not carrying water despite none on the trail and it being sunny/hot and the number of bikers without helmets but also wearing iPods/MP3 players while cycling - neither are smart IMO.

Wednesday because I enjoyed my brief venture onto the dirt east trail at Springbrook I decided to go back and do the full 4 mile loop. Actually half the loop is limestone. Getting parked at the other SB trailhead was fun, I got there at 8am and every spot was taken. Luckily a runner had just finished her run so I patiently waited for her to finish stretching and then was able to park. The first part of the trial was on the west trail down a hill, through the tunnel and then onto the dirt trail. This time I didn't go left at the intersection but straight on the dirt and mowed grass trail. The dirt trail is around 2 miles and wide,. mostly flat but with a couple inclines that pass through meadows and wooded areas full of birds, dragonflies and even a deer. After 2 miles the dirt trail joins up with a near 2 mile limestone trail that heads back to the main west loop. This trail was much busier than the dirt trail where I saw maybe 4 people walking dogs one runner and no bikes (which are banned on that section although it is not posted as such). Back to the main loop and I venture off to another limestone loop that circles a model airplane field with a few planes buzzing around but includes a nice view of what would have been Dragon Lake if nature had not changed the FP's plans (see FP website). It was a good end to four days (over 5) of running and hiking totalling close to 25 miles. None of it was fast but I was happy with the mileage total and more importantly how I felt after great.

Thanks for reading.
Posted by denalifc at 8:53 PM No comments: