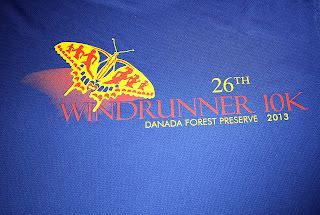 I just realized I've ran 3 races in the last 3 weekend. Not done that in a long time. Guess if you include the running club non-event it is 4 in 4.

Well today was a local race at the Danada Forest Preserve put on by the Lisle Windrunner club. This was a race by runners for runners. 10k distance all on limestone except the first/last 200 meters which was grass on an equestrian horse track made famous by a former Kentucky Derby winner.

Last year I had volunteered at this race, first packet pickup on the Saturday then I helped them pack everything away after the race. I recall seeing the race one previous year when I was just out running in Herrick (the race uses both connecting preserves). Always wanted to run it and now I have.

I picked up my race pack on Saturday at Lisle's Dick Ponds running store. The pack consisted of a race bib (#225), four pins and an awesome long sleeve blue tech shirt that is pictured above. I liked this race pack; no waste and no fluff. My friend Danielle was running the packet pick up along with her friend. Danielle's husband Jim was the race director. Both are fine runners as well.

Sunday got up earlier as Laura had to be at work early. Guess I was one of the first to arrive and get parked so I just sat in the car listening to some tunes before heading over to the start area about 7.30am for the race start at 8am. The race set up was just like last year with an old school runners race feel but with the modern touches.

Let me example: There was no fancy start/finish set up just two rather long ladders with a race banner strung between the two. There was race day packet pick up (that is getting rare). There was around 350 signed up. The race was timed from the gun start time, no chip timing yet the results which were hand timed were accurate and produced fast. Each mile was marked with a small sign and a high school cross country runner calling the splits from their watch. The water stations were just that, water handed out by more school runners but there was plenty of it even for the last runners.
The modern part was the great race food after, more than just bagels and bananas yet those were there as well. Nothing wrong with pizza at 9am or even gourmet duck, sausage and soft cheese (I didn't try those as I don't eat meat). I already mentioned the tech T shirt, no cotton at this race not that cotton is bad for a race shirt. Race results were posted fast as  mentioned; old school would have been waiting a week to get them :-) 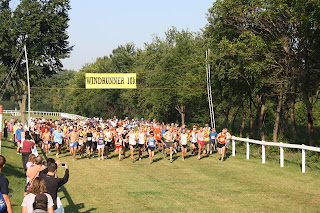 Photo borrowed from Windrunners (not 2013 race)

I started at the back of the field away from the fast guys from Dick Ponds. The course started on the horse track then travelled on the limestone trails in an out and back way except for a loop at the far end in Herrick. This loop is where the rolling hills are found. Like most of this area the course was mostly flat and if a Coloradan was running the hills it would have been minor bumps along the way but the Lakefront runners might have not cared for them. Luckily I run these trails at least once a month so knew what to expect. 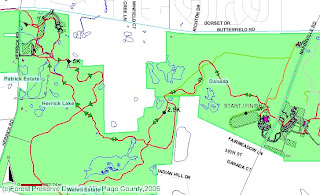 Did not really have any goals in mind just to finish but finish feeling good. Sticking to a fairly consistent pace I made it around the course running the whole way besides a little walking on the hills but making sure the walk was at a fast pace. I knew I was slow when the leader was on the way back when I had not even hit mile 3, more like mile 2.75 but I was just enjoying myself and the nature around me. Open meadows and shaded trails mixed up the course. I think I hit each mile at an even pace but other than a quick glance at my Garmin GPS I didn't record each mile. The volunteers did an awesome job calling out the splits which matched my Garmin less the 14 seconds it took for me to start the race. Well after 6 miles of running I rounded the corner back onto the horse track. Another volunteer was using a walkie to tell the race announcer who was coming in and they in turn called out the finishers name, another nice and old school touch. As I crossed the line to cheers from those watching and waiting a volunteer took the lower part of the bib number and another handed me a nice cold bottle of water which I immediately poured into my handheld water bottle. Sure there was plenty of water on the course but like most ultra runners I like to run with my handheld bottle even at 5k and 10k distances. Well maybe not my friend Amanda!!

Next stop was the post race food, which as mentioned before was a great spread thanks to the race sponsors. I also ran into RD Jim and thanked him for a great race. Danielle was holding down the fort at the food tent so I got to speak to her for a little bit.

Although I didn't win an awards (and yes they have middle of the pack awards for those not fast enough to win an age group award) I got to see they all received a cool draw string race bag rather than a trophy or medal. Much more useful in my mind as I am sure those fast runners have tons of medals just gathering dust in a box somewhere, at least that is where most of my finishers medals end up after a short time.

If you want a small old school modern touch well organized race I'd recommend the Windrunner 10k. Next year will be the 27th edition. I hope to be there again either  running or volunteering. Nice job Lisle Windrunners, RD Jim, Danielle and the rest of the club and volunteers.

And next week no races for me to run but I'll be helping at the WTTW 5k race in Chicago!

Originally this race was to be held at Deer Grove Forest Preserver in Palatine but Cook County FP got nervous about the number of runners so the RD had to move it and Lake County stepped in. Deer Grove is a mix of limestone and single track while Des Plaines River Trail is all limestone. I had been looking forward to some single track running but I, and I think all runners, understood the change and rolled with it.

The race started behind a shopping center with around 300 starters lined up on the Muddy Monk arch. First 100 meters was grass and then another 300 meters narrow single track and a true trail runner bottleneck to thin out the group before we hit the limestone trail. The race headed north for around 2.5 miles, turned around, headed south for around 5 miles passing the staging area, then at the turnaround we followed the first loop (sans south out and back) before diving back into the single track start trail to the finish. The course had primarily tree cover but a few open areas. Aid station with water and Gatorade was fairly evenly spread along the course depending on access points. There was a few minor rollers and some bridge over the Des Plaines river but it was basically a flat course.

I've ran this trail during the Des Plaines River Trail Races (half, marathon, 50 mile) in October as I will this year so much of the course was familiar to me. http://desplainesrivertrailraces.com/

Plenty of other folks out running, hiking, biking, even horse riding. Most cheered us on especially as back packers.

So my race very briefly. I am so undertrained this year (see previous post) and this would be my longest run all year. I knew if I ran slowly and even paced with some walking breaks I'd finish. I set out with some great folks who I meet via Nandini and Amanda but we soon all separated into smaller groups. Amanda who had decided to speed walk as much as she could hiked a mile with me as part of a walk break before she rejoined up with a few others. Most of the time I ran alone enjoying the nature. As it got warmer I did have a thoughts of heading back to the finish area early but thanks to seeing Deanna who encouraged me on I successful past the turn in twice and kept going. There was honestly not many folks behind me but I was not last and completed my goal. Very brief!! 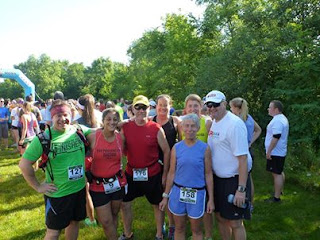 Finishing Muddy Monk was good for me and hopefully is a step towards finishing the Naperville Marathon come November. I also have DPRT in October but that will be a long supported training run with friends, or alone but seeing them over that course!!

Most Muddy Monk races are mainly dirt trails and I'll be back to run one of those at some point.

The race gave us a great green tech shirt in a Muddy Monk plastic bag that included a 13.1 sticker and a beer bottle opener. Finishers all got a green medal (or will for us backpacker as Fed Ex "lost" a box of medals but that is not an issue IMHO). After race food was hot dogs and brats which as a vegetarian I did not partake in although there was a large box of candy and some quality craft beer. 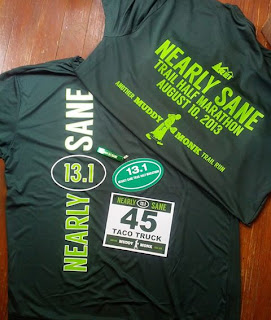 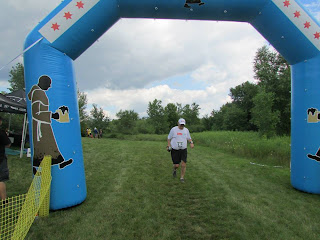 Me finishing (thanks Muddy Monk photographer)