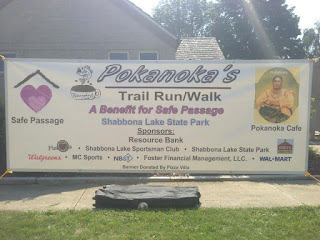 I signed up for the race a few weeks ago before the deadline for T shirts although I knew this would be a slow run and hike around the lake. After signing up my friend Carina told me she did it in 2014 and would be there this year. She also mentioned her husband Joe had craved a totem pole in 1997 and it was placed right outside the sponsoring Pokanoka's Café. Over the years she had also camped there 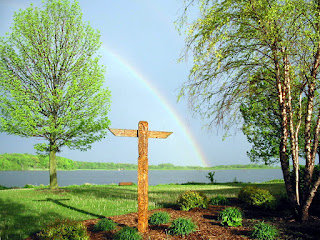 Race day dawned and I got up early and headed west to the park being one of the first to arrive, something I prefer to do. Headed to packet pickup. Got my bib, number 199, goody bag and then the T shirt. Sadly although the shirt is a nice design it is the one color I hate, pink, so it'll not get worn by me. (Got home and gave it to Laura to use as PJs or something). Wished it had been white. Still we was there to trail run around a lake and benefit a good cause not a T shirt so no biggie

Carina and our ultra running friend Mike arrived got their packets and it was time to line up for the start. The race announcer went through last years winners to see if they were there this year and mentioned the new age group set up; no award for last place just the fast folks. There was also a show of hands for first timers at the race,  I was. 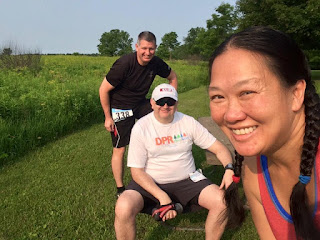 Race start and how we would continue (photo by Carina)

The race started almost cross country style with a white line sprayed on the grass and the 100 lined up behind so not many deep. We started need the back and once the gun was fired followed everyone out onto the trail system.

The course was primarily all grass on trails around 8 feet wide. There was a few sections of dirt and a little mud plus a number of hills and rollers. The course was around 1/3 woods with pine and other trees, 1/3 prairie and 1/3 lake or water views including a long dam crossing at one end of the lake. It was a scenic run. Parts reminded me of the Nordic blue trail at Kettle Moraine but with less steep climbs, except one big hill. Other parts reminded me of Rock Cut in Rockford area due to the lake views.  If I lived closer I would run at Shabbona Lake  http://www.dnr.illinois.gov/Parks/Pages/ShabbonaLake.aspx

Carina, Mike and I took our time on this course. We chatted and laughed a lot. We run some, walked more, power hiked even more. We stopped so Carina could take photos and ask other trail users to take photos of our little group. Around mile 4.5 Mike was told to go run so he could finish faster then run back to meet up with us. He ended up with 10+ miles. Our time was slow but due to making it fun the slow race time went by really fast. The hard part besides the hills was being able to see the finish line across the lake but as we ducked in and out of lake views it was great to realize we was getting closer and closer with every step. Finally we hit a really long earthen dam that holds back the lake water at the south end. After that crossing with stops for photos a small trail loop took us into the finish. Carina wanted to be the last finisher but someone was behind us. 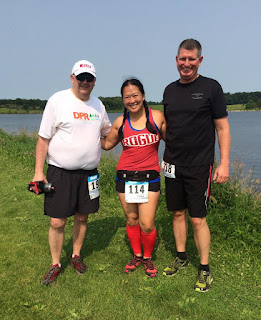 The Dam crossing (photo by a fisherman with Carina phone)

The race was really low key, around 100+ but I think it could grow. The course as mentioned was to my liking. The race benefits a good cause. They also have a 1.8 mile trail walk.

Next year I'll be back but maybe I should train. 2015 has been rough due to pneumonia at start of year, working full time and also putting on running events on some weekends, plus being back in school half time makes for one very busy me but as I love running especially on trails let's "just do it"  (Nike TM) 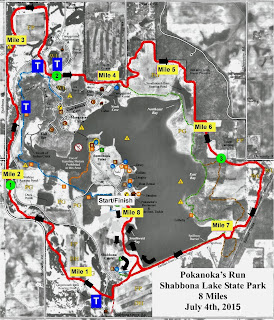 Course map (road crossing blue T, water station green numbers)
And for my ultra runners. As mentioned the trails reminded me of Nordic at KM and Rock Cut. Trails were all grass with a little dirt and mud but included hills. If you live close or want a change from training at KM, RC or Palos check out Shabbona in DeKalb County. Given the loop we used (8 miles) Mike and I thought this would make a good place to hold a 50k trail race - 4 loops for just over 50k and maybe a 1 and 2 loop races for those to experience the trail system. Easy access to set up an aid station at mid point  and plenty of parking plus a café nearby.
My next race was supposed to be the Hot Hilly 50k (20k30k) race in Kenosha in 2 weeks. Sadly so undertrained in distance and pace, as mentioned above I doubt it will happen. As I still want to be there thinking of volunteering then going to Lisle later in the day and volunteering at the Christmas in July 24 hour ultra. Although I finished today it was slow and maybe ugly. It felt good to finish but know I am not ready to even go 20k let alone 50k in two weeks. 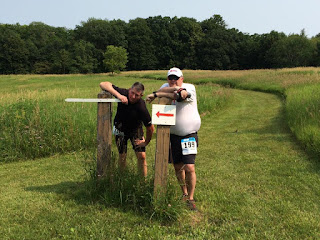 Are we done yet? Mike and I just before the dam crossing
Race results:  http://www.racetime.info/wp-content/uploads/2015/07/Pokanokas-8-Mile-Overall-Results.htm
All photos belong to the race or Carina. Consider it free PR.﻿
﻿
Posted by denalifc at 9:43 PM No comments: