No one feed the runner. Lisa completes her amazing journey 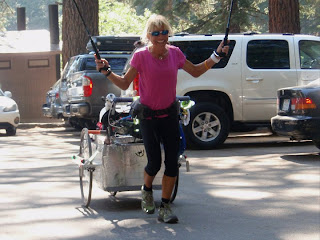 Photo by Dr Ben Jones (sure he will not mind)

Dr Lisa Bliss completed her solo, unsupported, self contained journey from Badwater Basin to the summit of Mount Whitney. Lisa is the first women and only second person to accomplishment the journey.

She has stated this is the hardest thing she has ever done. I am so proud of my friend and what she did. When she announced the journey I knew that if anyone could Lisa could. Sure it would be tough but then if it wasn't why do it. Lisa overcame 2 mountain pass crossings then a final climb to the summit of the highest peak in the lower 48. She crossed Death Valley in the middle of the summer. While doing this she was pulling, pushing and maybe kicking a 250 pound cart full of frozen water, food, clothing and a celebratory cigar. Tim, her boyfriend and another friend Will monitored the journey but offered no help, no supplies and no advice at all. This was all by the guidelines and "rules" set by Marshall Ulrich when he did the first successful solo, unsupported crossing and summit.

This is my first time at my computer since last Sunday. I am absolutely
overwhelmed with the comments and support! I am blessed to have such
wonderful people in my life. Thank you so much!

Tim and Willy, who were there to witness - but not help (a tough job for
them, like for example when the cart tipped over with me on top and all they could do is watch!); Jeff Sauter; Bill and Deborah Latter; Danny
Westergaard; Ben and Denise Jones, and Marshall Ulrich. And dear Nikki for
her progress updates (which I wish I could have read along the way!). And
many, many, many others.

Let's see... how can I keep this brief and just give a quick summary.

How about: That. Was. Hard.

- I started at 6:19 am Monday, July 25.
- No crew, totally unaided.
- Witnessed by the SPOT tracker and many others. Will detail later.
- Not sure if part of the official rules because I never asked Marshall
specifically, but I made it a rule to accept no advice about anything either.
- My official elapsed time from Badwater to the summit of Mt. Whitney was 89
hours, 48 mins, 38 secs.
-Traffic was a bit scary. Tim and Willy worked nearly non-stop to make sure
cars were alerted that I was on the road.
- People are allowed to summit with me, but everything I needed for the
summit had to be carried from the start. Nothing accepted. I summitted with
Tim, Willy, and Danny Westergaard (who also helped with traffic on the
portal road - many, many hours).
- The cart weighed about 240 pounds, 180 pounds of that was frozen water
(brought to start line by Jeff Sauter, who also helped with traffic for the
first two days through the climb to Father Crowley)
- My biggest challenge by far was Towne Pass, the 18 mile climb starting at
about mile 42. It took Marshall 16 hours to make this climb. It took me
almost 21. It was incredibly difficult and yes, I thought many times that I
couldn't do it. I broke down mentally at the last stretch. I could see the
top but I couldn't pull up that grade with the fierce head wind. I had to
cut "switchbacks" on the road in order to do it. I thought of Carl L's
message during Vol State about runners moving at 3 hours per mile. That was
me. I thought it would never end. But baby steps, while painfully slow,
still got me to where I needed to go...eventually.
- In retrospect, I should have dropped the cart in Lone Pine (there is a
choice of LP or at the Portal Trail) because the Portal road climb was
nearly as bad a Towne Pass. The cart was still heavy.
- I started the 11-mile summit at about 11:30 am. At about 3/4 the way up,
Tim and I went ahead and Willy and Danny moved a little slower. It was
bitterly cold. I was prepared for anything, carried all emergency and all
weather supplies from Badwater, but it was still very cold and windy. I
fought hypothermia the last few miles. Tim and I hit the summit around
midnight. (Details later.) I was done. We took a couple of pictures with our
frozen hands and the cigar had to wait until morning. I signed the book and
then went straight into the survival hut to get out of the wind. Two hours
later, Danny and Willy joined us. We spent the night in there and when I
turned the SPOT device over to stop the blinking, it lost the GPS signal.
-We put on every piece of clothing we had (at this point, I was done and
could accept help) and we slept. Well, sort of. At least we were out of the
wind.
-We were up at 5 am, and we started our descent around 7:10 am. The weather
got progressively worse over the next few hours and most of the descent was
made in rain, hail, thunder and lightening, complete with seeing 2 rocky
avalanches.
-We were soaked to the bone back at the portal but that didn't stop me from
getting a cheeseburger at the Portal Store, and yes, I was stuffing my face
when Marcia came over to the car to congratulate me!
-The first day was "cool" and overcast. I was lucky.
-I slept about 1/2 hour the first night, a total of about 1-1/2 hours the
second, and none the third.
-I had enough water, even dumped about 2.5 gallons.
-I had enough food, about 20,000 calories.
-I started with wrist tendinitis (from training with the cart) but that
seemed to resolve by the last day. I had trouble with anterior tibialis and
achilles tendinitis but it was manageable. I had some pretty bad plantar
fasciitis too, and thank goodness I was able to manage it. That is painful.
These were new problems for me, certainly due to pulling the cart. I am
surprised I had no back pain whatsoever.
-Denise pre-taped the balls of my feet and I had only one small blister that
was easily treated.
-This was a record for me for the most days without a shower.
-It was an adventure of a lifetime!
-I will never do it again. :)

I hope I have time to write a report. I really want to.

Thank you so very much for the support on the list here and all the awesome
support of Tim, my friends and family. This may have been a solo, unaided,
self-contained crossing of Death Valley to the summit of Mt. Whitney, but it
was in no way unsupported. I am deeply appreciative.

(Any copyrights owned by Dr Ben Jones - photo and Dr Lisa Bliss - Lisa's report to the ultra list)
Posted by denalifc at 7:31 PM No comments: 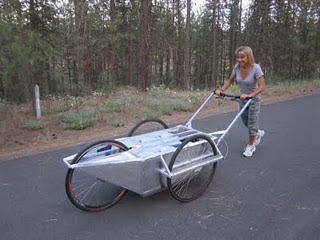 Check out her weblink here: http://www.voaspokane.org/LisaBliss

Good luck my friend.
Posted by denalifc at 8:08 PM No comments: