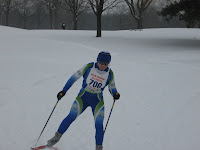 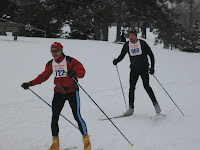 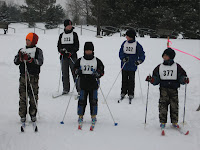 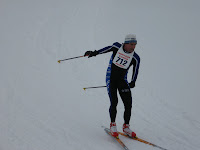 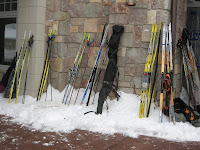 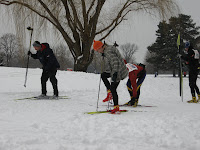 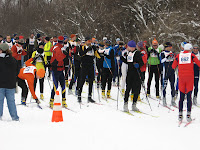 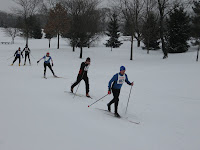 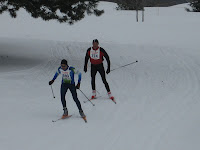 No I didn't do a Cross Country Ski race but I did go and watch one today. After a 3 mile run slogging through very snowy trails at Herrick forest preserve I headed next door to the Arrowhead golf course for the 16k Northern Illinois Nordic XC ski race. It was originaly scheduled a few weeks ago but this being Chicagoland the snow tends to come and go and naturally tends to disappear when needed. I think this was the first time since 2004 that race was actaully able to start locally. The groomer at Arrowhead (a Wheaton Park district golf course) had rolled and groomed an 8k trail for the skiers. Most would do two loops (16k) but there was also a one loop race and a kids race.


I arrived around 9.30 at the new club house where they have now included a ski shop room as the golf course is open for public XC ski during the winter. I wasn't racing and in fact have never been XC ski but now really want too. I have friends that do the Birkie every year and if you've seen XC racing at the winter Olympics the speed and action can be thrilling. Milling around the ski shop area near the finish line camera in hand I ran into Bill Thom. I never knew he skied but really I am not surprised. Bill is a great athlete that I know from ultra running. We chatted for a few minutes before he had to get ready for the race. Walked around watching racers wax their skis and taking photos. Loved the view of skis stuck and standing up in the snow. Heard a voice call my name and it was Bill Weidner. Bill is a long time friend of John Corrigan who I do event work for. Bill also has a great book out called "The Complete Guide To DuPage County Trails". My next run into was an Aussie triathlete, Mark Hauser, who I had not seen for a few years. Mark is often on the poduim at tri races and a great bloke.


The race was great. A fast start by the top guys and everyone pushing off behind them followed by a few late starters. Arrowhead had groomed the 8k course so it zig zag around the golf course and up and over hills. From the start line I went over to near the finish line and had great views in different directions. Through the first loop the lead guys were fast with two out in the lead. Sadly I didn't have time to see the end so after watching a few more racers finish their first of two loops I headed home.


Cross country ski racing appears to be a great sport. Guessing it pays to live in Wisconsin or Minnestoa for regular winter snow. Chicago can be hit or miss if you want snow. This year as been kinder to the local XC skiers although it has caused some icy days despite lots of snow (the Joilet XC ski race was cancelled a week after Arrowheads).

My first post of the year and first since around Farmdale trail race time.

Been thinking about races to do in 2008. Those thoughts keep changing and well likely change plenty of times during the course of the year but I do know it will be another year of trail races , event work and volunteering. Below is my maybes for races and volunteering but stay tuned for changes and additions.