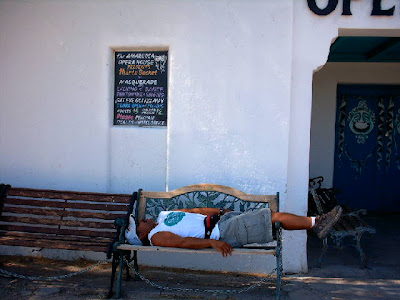 Update: Steve has decided not to do his planned solo run this year. Hopefully it'll be on next year or the year after. Whenever Steve is ready to run myself and his fellow crew will be there to guide him across the desert and blacktop.

This past weekend Adventure Corp sent emails out to the 100 or so accepted applicants for the 2011 Badwater Ultramarathon. As previous readers (think there are some) know this is one of my favourite events. It is not something I could ever run. 135 miles through Death Valley in July with temperature around 125 but I've crewed there 3 times and love it.

My good buddy Steve has crewed those 3 times with me plus he has a 4th crew time. Steve has covered many miles pacing our runners at Badwater including topping 50 miles one year. He is a little energizer bulldog that can just keep going and going. Steve could easily finish the full 135 mile crossing but the race application calls for a minimum three 100 mile ultra finishes. Steve has two successful finishes at Arizona's Javelina 100. At a minimum he would need another, then maybe more. Steve just wants do a crossing so in the tradition and spirit of how the race got it's start he has decided to do a solo crossing along the race route this July.

I hope to be there to crew him. I love Death Valley. I love the idea of running from the lowest to the highest points in the lower 48 of America. I could never do it but I can be there to make that dream come true for my buddy.

Good luck Steve and let's get the planning started my friend
Posted by denalifc at 1:28 PM 4 comments: