If you are looking for ideas for some race here are some ideas. I will actually be at all three of these.

November 12 (Saturday)  Paleozoic 50-Km and 25-Km on the trails of Palos Swallow Cliff forest preserve. Limestone trail although more rough than some county trails. One out n back loop for 25k, two loops for 50k. Finisher medals for those that finish. Good aid stations and neat T shirts

Posted by denalifc at 9:36 PM No comments:

Wednesday night while the Cubs were busy losing to the Dodgers I ventured to Downers Grove to attend Anderson Bookstore author event with ultra runner Charlie Engle.

Charlie recently published his book Running Man which details his life from childhood through his recovery from drugs and drink to running across the Sahara plus many other running adventure to being unjustly convicted of mortgage crime to his new life upon release.

I had previously meet Charlie in 2009 after the Badwater 135 ultra in Lone Pine CA, just outside Death Valley and right in the shadow of Mt Whitney. Kelvin (the Aussie I had crewed for the second time) plus my fellow crew member Steve just happened to be in the same pancake breakfast house as Charlie and some of his crew so natural we all started chatting about the race. Charlie and I have also been Facebook friends for years and he says he recalls that Lone Pine meeting despite everything that has happened in his life before and since. 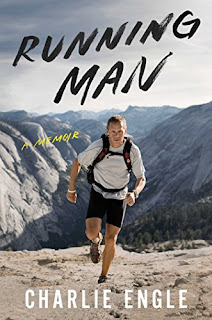 Drove to Downers Grove after work, arriving early but plenty of time to grab a coffee and sit outside to enjoy people watching before heading to the bookstore. Upon arriving Charlie was chatting with a guy who had just got back from running in Colorado and one of the bookstore staff. He saw me, said "Ian" and got up to shake hands and give a friendship hug. Joined in the chat about running and races. Charlie had just competed in Laz's Backyard Last Man Standing "event" running for a full 27 hours but sadly (or not) that is a DNF as only one person can actual finish. Saying that a few years ago the last two decided to call is a day together so no one was declared the winner, Laz wins!! Couple other people arrive including Flatlander and TJM host Scott who had interviewed Charlie a few weeks before. So although only a total of five people joined Charlie it was a great evening. He discussed the book, what was in it, things about his life including elaborating on the prison sentence time and also what the publishing process was like. He did touch on races and running but as Charlie had stated to us his idea was not just to write a running and race book but one that covered his life and could be of interest to everyone. I feel Charlie has another book out there ready to be wrote. He also read form the first chapter. I wonder if it is strange for an author to read his own words aloud to a crowd but then again he did the audio version plus musicians do the same when doing concerts.  Although he didn't do a QA as most authors would do he answered questions as he went along. There was a lot of chat and banter amongst all.

The 90 minutes went by very quick but was a great evening. I had actually already read the book having requested my local library obtain it (so if you are not sure it is on the shelf at Naperville Library) but I had always said if Charlie appeared at a book tour stop in the area I'd buy the book. Thank you Charlie for the great words you wrote for me. And thanks for taking photos with most of us there. 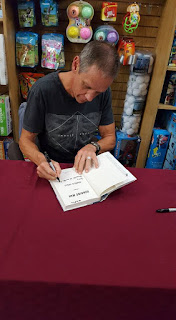 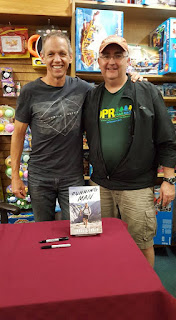 Charlie and myself (photo by Scott Kummer)