Back to the Trails 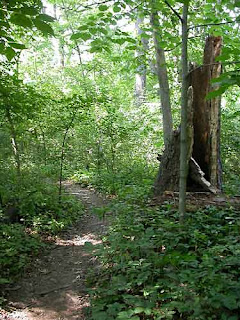 Today I went back to the trails.

It's been one wet spring into summer in the Chicago area. The trails have been wet and therefore muddy and activity such as running and biking easily tears up the trails. Single track is the worst. I've missed the trails but it was for the best.

I did run the trails at McDowell in Naperville but that is mostly wider grass and dirt so dries out quickly. Not so the trails at Knoch Knolls in southern Naperville. The DuPage River runs on both sides of the park where two branches come together. The park easily floods.

Last time I was at Knoch Knolls was during the winter when the trails were covered in snow and ice. With screws in the bottom of some old trail shoes winter running is so easy there and very enjoyable. The trees are bare and nothing is overgrown as nothing has grown yet. You can easily see the forest through the trees and spot the deers staring back at you and the hawk perched high in on the tree branches. Now it is summer with temperatures in the 80s. Due to the rain the trees are very green as is the grass and the vegetation.

It was good to be back at Knoch Knolls.

KK as I like to call it is not the biggest trail system in the area, that would be Palos but it is local and has a good mix of grass trails, some limestone and plenty of single track. There is also a new paved bike trail. Luckily my route which I run most of the time only uses the paved section for around 300 meters.

Today I arrived early and was meet by 60 high school lads doing some cross country training around the sports field. They were moving fast in packs. My plan was to do two loops of my own KK route with the second one being a reverse of the first. Running trails in reverse is almost like running a new trail. The first part is wider grass followed by a nice single track section that runs along the north river branch. It wides around the trails and in the spring is covered in bluebells. Of course I missed those this year. This trail empties outback onto the wide trail before a turn to the left brings me to the prairie crossing which is totally exposed to the sun. Sadly there is also a power line running over head. After a half mile or so I make a right to follow some single track along the south branch river. This trail tends to get overgrown in the summer and that was the case this time. Often it is so bad I can't through so guess I lucked out today. This is also one section that floods easily so I was surprised it was relatively dry. After the small paved section I joined what to this park is a hill "climb" before hitting the longest section of single track which is really 3 tracks that I join together . I love this section as it winds it way through the center of the park but it is know for retaining water and therefore can be muddy which in parts it was. There are also lots of roots and rocks on these sections. Finally I arrive back at the parking area.

The high school runners are gone but I see others coming into the park on foot and bikes plus a few dogs. After fueling up and changing out my water bottles I head back to the trail and do it all again but in reverse. This was the only time I came across bikes on the single track guessing the others I saw all stayed on the paved trail. One lady was powering through the overgrown lower river trail and doing very well. I'd see her again later refueling by her car. The other biker was riding the north river trail which has many roots and of course he had no helmet on. Scary.

It was great to be back on the trails and covering some good distance. It total I ran 8.6 miles and the effort was good most of the way. Nearing the end the sun was getting hotter and I could feel it has I drank most of my water bottle. A fresh ice cold bottle was waiting for me back at the car along with a Clif bar. 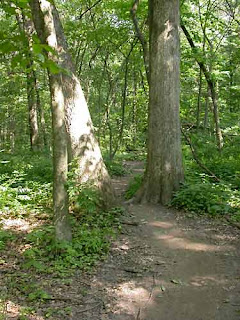