We all know how much I like Death Valley. Been there 4 times and when I can't be there I am reading about it, watching documentaries about it or following a race such as Badwater Ultramarathon.

On Oct 8th it'll be time to follow the Furnace Creek 508. The race starts in Santa Clarita (near LA) and makes a 508 mile loop across the Mojave Desert, through Death Valley National Park and Mojave National Preserve, to the finish line at the gateway to Joshua Tree National Park, Twentynine Palms, CA.

The race is by bicycle and includes solo and team relays. One of the solo racers is Mike Hanes from Maine. http://michaelh.org/

I first meet Mike when he crewed for his father, Steve Hanes at Badwater 2009. Steve crewed with me the previous year for Kelvin. Like his father Mike is an endurance ultra athlete. He's done a few ultra marathons but long distance biking is his favorite. In 2010 he joined his father at FC508 for a two man relay team and had a successful finish. This year Mike rides solo with father on the crew.

Mike is also raising money for Indonesia Initiative Friends Peace Team. You can read more about the charity on Mike's charity page: http://michaelh.org/

FC508 is put on by Adventure Corps who also organize the Badwater 135 ultramarathon. http://www.the508.com/info.html 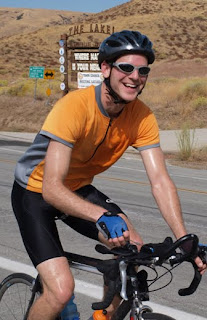