Welcome to another Runrace production put on by the great RD team of Michelle and Bill Thom.

This team who are both ultra runners just love to put on races for the runners. They hold 50k ultra in two of the Palos Forest Preserve. Then there is their Chicago Full Moon 5k road race in Norwood Park to benefit MS. There is also the odd other races such as cross country events and even a winter ultra this past season.

September 8th was the 5th year for Terra San Pave I believe. Bill has designed this awesome 4k or 2.5mile loop that includes grass trails, dirt single track with roots, non-groomed limestone and more muddy dirt trails. Race distances to pick from are 1 loop (4k), 2 loops (8k), 4 loops (10 mile) and an 8 hour ultra where ultra fans run as many 4k loops in 8 hours. Race always as a unique T shirt and finishers get a nice year numbered pin.

This race is really low key. Not many runners do it which is a suprise as it has so much potential to get a crowd (although the permit limits the race numbers). It is a cheap entry fee and the SWAG T is neat (as they are at all Runrace events). Everyone is so friendly. The race does clash with a few other local ultras so maybe moving it 2 weeks either side might work. Bill also does little PR besides his email list but I know many folks will post the race on their social media and blog sites. Spread the word people. Saying that the numbers signed up for the 8 hour ultra was a record.

Well this year the race got an entry from Mother Nature. The past week, has had been the case most this summer, we got a lot of rain. Many areas especially river basins areas got flooded and that was the case with the original Terra course. It crosses the Chicago River North Branch twice and use trails within the basin overflow areas. Although the water was a little down race day parts of the west part of the course were still flooded. Bill had to invent a new 4k loop all contained in 1/3 of the normal real estate. It meant that although we would get some dirt and gravel trails he would have to include a paved section (it had a gravel side to it) and a over extended parade grass loop.

This new course due to the pave and grass looping lanes section was challenging but Bill did an awesome job of getting exactly 4k course for us to use. Sure it was not the original fun course but at least we could race, run and hike.

My intention with this race was always to run it slow and include a lot of hiking. Currently training to pace my friend Steve at the Javelina 100 when I will do the last 20 miles with him, after he has ran 40 miles. I know Steve will be hiking some it and that uses different leg muscles than running. Saying that I need to train both.

After handing out the ultra packets for the 7.30am start ultra, next up was the 4k, 8k and 10 mile division that would start together. I got my packet and put my timing tag on my shoe to demo to others (ultra runners had an ankle strap timer) then close to race time got everything out of my car I would need. Waist pack with nutrition (and ID), water bottle in handheld carry, Clif Bar cap and running shoes.

New to me was the drink in my water bottle. They say never to use or do something new in a race. I broke that rule by using Tailwind for the first time. I had purchased some stick single packets at Peak Running in Downers Grove and wanted to test it. As this was more a training run with friends and an aid station plus I was back at race HQ each 2.5 loop if I decided to go with the different drink. I am lucky as I can "stomach" almost any race drinks. Not saying I like them all but rarely do I get issues except once when using the race supplied Cytomax at Powerman Duathlon. Tailwind was great. I used the lemon one and loved the taste. I do think one full stick was a little heavy for me so I diluted it after first loop and if I buy the pouch will use less mix which tends to be the case with most drink mixes I use.

So back to Terra. RD Bill said a few words when we took off over the grass heading north to the pave trail. Think that was a little over half a mile then we hooked into a gravel horse trail for a bit before returning to the pave. Nearing the backside of HQ we turned sharp right onto the old course (although we did this trail in opposite direction) and right away we could see the flooding on the part of the old course we would not be using.It looked bad. Apparently some horses went through and it is was around 2 feet deep. This part of dirt trail with rocks and erosion took us to Dempster St and onto the grass parade loop. And the tedious it came with. This was a mile of running in lanes Bill had created with coloured flagging basically going up and down to a certain turn point. At first it was a little confusing but we all figured it out and after a few loops a nicely trodden path was easy to follow. I guess this makes us all tougher runners by race end. Back to the start/finish, fuel up thanks to Paul at the water station then head out for another loop.

I did this 4 times. An ultra distance was 11 loops. Many did more.  Surprising the loop per my Garmin was exactly 2.5 miles although I think the parade loop made the Garmin a little crazy with all the ups and downs and by race end it read 10.2 miles.

I was happy to finish my longest run in a few years and although need to go longer at Javelina feel I am in a good place to get that loop with Steve. 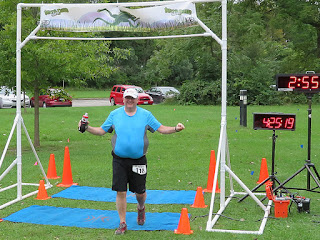 Also doing Terra was my friend Jeni. She is returning to Javelina 100 again this year after her great run in the desert last year. Jeni recently finished Ohio's Burning River 100. Crewing and pacing Jeni will be her mother Kim who ran the Terra 10 miler. Kim and I along with runner Eileen ended up on a impromptu team and took 2nd place each winning a pint glass. My last Spotted Cow beer purchased after Ice Age Trail race tasted really good from it. 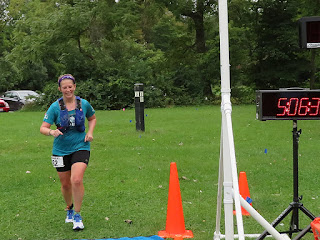 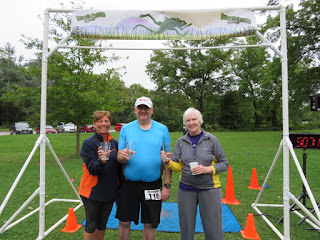 Jeni finishes another loop on her way to 8 hours success. Team Loopy (Kim, me, Eileen) with our pint glass trophies (Photo by Bill Thom)

The race awarded finisher pins to all runners with the number of Terra's completed on them, I earned my 2nd year. There was pint glasses to all ultra runners, and medals went to overall winners going three deep in each division. RD Michelle provided some awesome deli sandwiches including veggie ones for those like me that partake in the veggie world. 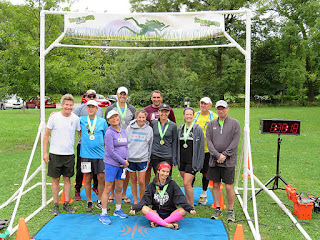 I will be back in 2019. Hopefully the original course will be back but even if it is not it'll be a great time. Check out https://www.runrace.net/home.php for the Thom's other races and maybe I'll see you in Palos in November
.