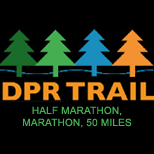 Can't believe this was the 5th edition of the Des Plaines River Trail Races. This was my come back marathon in May of 2010. Four months later I did my comeback 50k race at Rock Cut. In the years that followed the race moved to October, grew in size so that remote parking was called for by the forest preserve this year for those running the half and full marathons. I had ran the half in the past three years but also volunteered each of those years at packet pick up before running. Handing out the time chips was very inspiring.

For 2014 I was signed up again for packet pick up and then running the half. Sadly running the half became a DNS as midweek I was hit with food poisoning. Although now recovered I decided to not run as for a 24 hour period I had had no food and slept for 20 hours. But nothing was going to stop me from being there to volunteer and help out the great race directors Ed and Terry. Like past years I handed out the timing chips from RunRace for the 50 milers. The half and full marathoners had bibs with the timing chip attached to the bib so we just had to check them in and hand over their goodie bags.

As you might recall from last year's blog report I really like the DPRT T shirts. Sure the design is the same but they add the current year and change the color. This year same logo design but a grey short sleeve A4 shirt plus the RDs added a bonus black DPRT cap. The 50 milers received a black race vest ideal for winter running when not that cold. Nice SWAG again.

After the half marathon took off (50mile at 7am, marathon at 8am, half at 9am) it was time to convert the packet pick up tent to a post race food tent. All runners received a food ticket so they could get a burger (including veggie version), chips, cookie and Gatorade served up by Ed's wife LuAnn and her team of volunteers. I then helped Terry move the start/finish arch from start to the finish, reset signing arrows to send runners into the finish, poured finish line water and recovery drink then finally the fun part of helping the RDs hand out finishers medals.

The race did have a few minor mishaps but both these are correctable for next year; both Ed and Terry were already working on the plan of ideas while handing out medals. Some runners missed the half marathon turnaround despite the signage. Some tweaking will easier fix that (extra volunteers, different bib colors for the half etc). Same with the first 50 mile turnaround which added a half mile each way (ultras are never exact anyway, Horton Miles they call them). Due to the rain during the week one section was water logged by the river through an underpass, perfect trail running!! And it rained for a few hours at the start of the race. Sadly not even Ed and Terry can do anything about the weather but it was probably close to perfect for running in the right gear. Turnarounds will be fixed; weather forecast probably not.

I hope to run again in 2015. Was sad to break my streak but with crewing and pacing at Javelina 100 in a few weeks for my buddy Steve Ochoa   http://spiritextreme13.wordpress.com/  I made the right decision. I am very inspired but all the runners, their supporters and crew, all the volunteers and the great race staff especially Ed and Terry, plus timers Michelle and Bill (RunRace.net)

Posted by denalifc at 8:41 PM No comments: