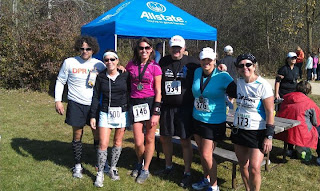 As the photo above says DPRT consists of a 50 mile, marathon and half marathon. The course winds along the DRPT through woods, forest preserves and along the river. The surface is all limestone with only a few minor preserve roads to cross. Aid stations are every 2.5 to 3 miles as this is a trail race with limited access points to set up any more. Runners are advised to carry a water bottle (most did).

Last year I did the marathon. Lacking time to train for marathons or ultras this year I signed up for the half marathon. I also volunteered at race morning packet pickup and was assigned to bib and chip pick up along with a great crew of others. In total there was close to 400 people signed up for the series of races. Most were doing the half but the numbers for 50 mile and marathon both had more than doubled from 2010, I think the half had tripled in numbers.

It was a chilly start to the race but by the time the half started it was warming up with the weather being possible the best it could be. The tree cover would provide some shade but the meadow areas you could feel the sun shining down.

My only goal for the half was to finish but possibly run my fastest time in over 10 years. 10 days ago I had ran the Oak Brook half marathon course (can't run that race as I set up OB 1/2 course each year). I ran that one well so to beat that time was the goal.

To cut a possible long story short (hence running a half and not the 50!!!) I reached my goal and except for trying to choke on a S Cap I was happy with the race. Sure it is still almost a time zone off a PR but.....

Many of my friends ran one of the 3 distances or volunteered at an aid station. Big thanks to Kelly for running with me for some of the race. Kelly is coming back from having a baby a few months ago and did an amazing job. Other members of her family also ran first marathons and 50 miles. Zach Gingerich won the 50 mile in 5 hours 37 mins, that is around 6 mins faster than 2010 which was the fastest 50 in the USA in 2010. Jim O'Brien won the marathon in a great time for a course PR. Kudos to Juan, Anastasia and Paige for 50 mile PRs. And major kudos to the Pope as in Dom the energizer bulldog that ran his first 50 mile.

DPRT was and is a great event. The RDs do a great job. They also give out nice T shirts with one of the best race logos out there and the medals for half and marathon are nice and heavy weight with the race logo and distance. 50 milers get a buckle and rather nice it is. Next year maybe I'll do the 50 mile to complete the DPRT bling set.  And there is also a catered lunch for all runners with beer.