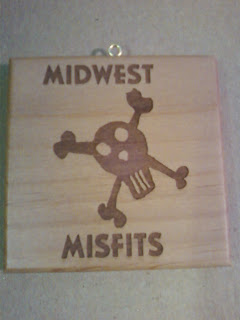 Got to be a first for me, a "race" on a Wednesday. Today I traveled further west of Chicago than I already live to run a 5k trail non-race put on for the 5th time by the good folks of the Midwest Misfits Endurance Club http://midwestmisfits.blogspot.com/.

First heard about this non event on one of my many local running Facebook groups I have the pleasure of being on, in this case the Coyotes of Rockford (well out of Rock Cut park). Quick email exchange with the RD and I found my way on a chilly, but warm for November, morning headed to Silver Springs park near Yorkville, IL.

Driving into the park I could see some hills and ridge lines. I'd hiked some of the trails along the Fox River that is on the north edge of the main section of the park. Those are fairly flat and wide, likely used for cross country skiing in the winter but RD Kristen and her hubby had apparently created a 5k loop with a good mixture of flat, single track, and a little road, oh and plenty of hills. After meeting with a few new faces (actually all 20 or so were new faces to me), a briefing from the RD we all headed up the hill to the start line. Few photos and Kristen or someone said GO. This is a trail run with a twist as within 200 meters we were to stop at a truck grab a shot glass, chug it down and head out onto the trail system.

I immediately did my normal start slow at the back but this time didn't taper off. Along the wide grass and gravelly (is that a word) trail next to the river with the sounds of hunters across the river. Most people pulled away from me so I followed two young ladies who I figured knew the course. The course was marked with orange and yellow spray paint, very appropriate colours for Thanksgiving. It had rained the night before and the RD had worried some markings would have been washed away. some had faded and all will very soon but only one person missed a turn so we heard. Soon we hit the first hill and after climbing a long way we headed down and along a nice section of single track. The trails had lots of tree roots but the RD and friends had raked all the leaves off the course the day before. That made me laugh as who rakes leaves but it put another excellent spin on the non event. More hills, more single track and I was still keeping up with a few runners. Around mile 2.5 we emerged from the forest and took the park road running the wrong way down the one way system. towards the finish line near the park area.

And for the next Misfit spin the RD had put the finish line on top of a small hill that leads from the parking area to one of the park's lake. Nothing like a nice climb, to cool down to, leading to the finish line picnic bench. Was presented with an awesome finishers medal, see photo up top but think what it looks like on a green neck ribbon.

A few folks came in after me but most of the 20 plus crowd had finished before me. That is often the case but as I say more trail time on the trails that I love to run. The traveling trophy, a painted skull (found on the Silver Springs trails) mounted on a wooden stand was presented to the winner for the 3rd time I believe.

I had lots of fun. The Midwest Misfits Endurance Club are a great bunch who I hope to run with (or not far behind) again. The trails at Silver Springs surprised me but then Nolan Ming was right. Illinois doesn't have many trail systems with dirt and single tracks but what we do have are all great, I've added Silver Springs to my list of places to run.

Thank you Kristen and her family for a great non event, all the Misfits and the trails of Silver Springs.