Rain (Run) With The Lions 5k

A chilly, rain and wind could not keep well over 300 runners from attending the 2015 edition of Longwood PTA's Run with the Lions 5k at Danada Forest Preserve in Wheaton, IL

Last year's race was held at St James Farm in Warrenville, another DuPage Forest Preserve but due to extensive construction there Longwood PTA moved the race to nearby Danada. St James was primarily a grass trail system while Danada utilizes limestone trails besides the start/finish line area.

The race had a great entry fee for those that signed up early. What race promises a nice tech event shirt, a scenic course, a cool finishers medal and some great post race food by their great sponsors? Run with the Lions 5k of course. Last year was a great blue shirt, this year was a red one with a new logo on the front. The same new logo appeared on the finishers medal.

Packet pickup was really smooth at two different locations on two different days. The goody bag included a bunch of flyers some from local restaurants with offers that I'll be using.

Race day I was up bright and early. It was raining as it had been when I went to sleep a number of hours before. Although it was not as bad as before it was still coming down and the temperature had dropped to an unseasonable level. Looking at the radar on the internet didn't and wouldn't change the story so pulling out the running jacket I got ready. Despite the rain it had to be a shorts day but to go with those was a long sleeve DPRT shirt, the jacket and a running cap. Sadly I left the gloves at home and a thin pair might have been a good idea. Danada has two parking areas, one close to the race HQ and the other next to the equestrian center a short walk via a trail tunnel to the race site. Naturally I choose the longer walk via the tunnel. A number of people parked there and a hardy volunteer was directing people to the race. I run at Danada and the contecting Herrick a lot so knew the way but appreciate the volunteer for being out there in the rain. Ran into a number friends (Bob and Diane, Julie and her daughter, neighbor Kathy, a few members of the Midwest Vikings) before the race started and again after.

The race started on the Danada horse training track where a former Kentucky Derby had done some  training. In fact the preserve still has a set of horse starting gates on display. With the rain still coming down race director "Drew and his Crew" said some words and started the runners. 400 meters of grass running then a left turn onto the limestone trail that would carry us to a turnaround just inside Herrick. For the most this section is flat with meadows on one side and trees on the other. As the course was out and back the scenery changed sides on the return. Each mile was clearly marked and every so often their was a volunteer holding an inspiring sign created by one of the students at Longwood school.  Not far from the turnaround was a well maintained aid station with plenty of eager volunteers offering water and then finally at the 1.5 mile turnaround another cheerful volunteer sending us back the way we had come.

I have not really trained much this year. Having had pneumonia a few months before I was not sure how my pace and race would be. I decided to take it easy and maintain a steady but slow pace and minimize the walk breaks. This plan worked very well and I was pleased with the effort. Rounding the turn for home was so nice. Like everyone does, I picked up the pace and finished strong.

A volunteer handed me a finishers medal and another a bottle of water. As  drank the water Diane and then Bob would come across the finish. It was great seeing them there for their second time of running this 5k. Bob would end up getting 2nd in his age group and has they had to leave for home promptly I did the honors and picked up Bob's award. It was an ESPY award moment!!

Just like last year the race had secured a number of food sponsors who supplied their products. Zoups was my favorite plus some different choices of yogurt from TCBY, coffee from Starbucks and a good selection of bagels, fruit and salted type snacks. There was a place supplying chicken sandwiches but as a vegetarian I took a pass on those. Onto the award and despite the still rainy conditions many had stayed around. The timer "Its Race Time" did a great job of producing the results quickly. Top placing were presented a bag with their awards inside. Last year my friend, Janeth, won the female race and got some nice awards so guessing this year was no different. Age group (top 3) got a placing disc that fits on the back of their finishers medal, cool idea. Then it was time for home.

Despite the weather Longwood PTA, the race staff and volunteers put on another great event. The proceeds from the race go to Longwood PTA to provide things for the kids at the school, a worthy cause. I highly recommend "Run with the Lions 5k". I'll be there in 2016 and hope you think about attending too.


Photos of the winners below. Congrats to Keely and Sam. 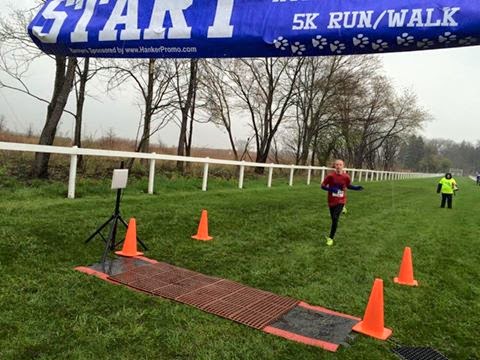 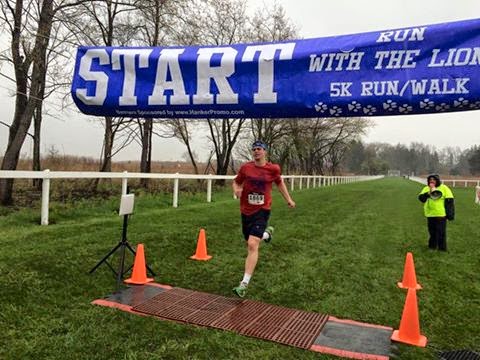 
Photos and logos borrowed from the race website and Facebook page.
Any copyrights owned by the race and Longwood PTA.
Posted by denalifc at 11:20 PM 1 comment: