For a race with Sunburn in the title your know what to expect. Well last year's event turned out to be 70 degrees with clouds, windy and some drizzle. Last year's conditions likely lead to close to 70 folks to sign up for the 2nd annual CHUG Sunburn Six in the Stix, a six hour non event held in a state park in Bartlett IL.
I'd kept an eye on the weather forecast for race day. All week they had been calling for sunny skies and highs around 90+ and race day that came true. The humidity also kicked in a little but the Chicago area can be worse.
Steve Richey picked me up at 6am along with his friend Danielle Steimel, a local runner who runs with Steve. Steve's car was packed with ice coolers filled with bags of ice and tons of drinks. I brought along a small sports bag with a small cooler inside with two 20oz water bottles and one for energy drinks. Luckily I knew the park had a water pump with decent tasting water and the awesome race director had supplied some more coolers with tons of ice. Plenty for all so cold drinks were readily there and boy they were needed.
We made good time getting to the park arriving third I recall. It wasn't long before the car park was packed. Brian had reserved the picnic pavilion which by the 7.30am start time was packed with coolers, water containers and crew people. This parks also has flush bathrooms, a a rarity at events - most ultra runners know a bathroom is behind every tree. This park has no trees, at least not on the 2.28 mile trail loop!!
I decided to wear my long sleeve Patagonia Badwater technical shirt that I picked up when crewing Badwater in 2008. I also picked my lightest Brooks shorts to wear, CHUG running cap, road shoes and my trusty awesome Drymax socks - Drymax make the best running socks hands down, hmmm feet down?
As the temperature rose we lined up at the start line, a card table with a large sheet of paper to record loops done (all on the honour system). As normal I lined up at the back to do my normal start, slow and taper off. Brian said GO and off we went. Not sure how many started but lots of no shows given the conditions. I set out with a goal in mind plus a back up goal
Goal A: 18 miles (combined total of SB6 2009 and WB6 2010)
Goal B: a half marathon
Goal C: One loop to not get a DNF
A sort of target was also to run one whole loop without taking a walking break and I was smart enough to decide this had to be done on loop one. That goal was completed. As the temperature rose and rose I went to a run/walk pattern plus one almost totally walked loop just because. Most of the loops I ran alone but would always see plenty of others on the trial normally passing me. Ran I think 3 loops with Kelly including 2 with Kelly and Dom and my second loop was with Deanna. I hit 11.5 miles in a fairly good time and took a 30 minute break to cool down in the shady pavilion. Then it was time to head back out into the heat hitting Goal B and then to take aim at Goal A. Near the end of the race folks switched to a half mile loop (within the rules). Too record a loop, either the full 2.28 or the 0.5 you had to complete it before the six hours was up or it didn't count. After 7 full loops I switched to the small loop and hit four of those and watched my Garmin roll over to 18 miles. Goal A was hit.
Matt Condron won the event with around 41 miles, 5 miles less than last year due to the brutal conditions. My friend Amanda got in 35 miles for the female win. When Brian posts full results I'll add a link and I'll "borrow" some photos from folks to add to the report.
This again was an awesome CHUG event. Brian has a knack for RDing. The CHUGs and friends, runners and crew help make this a special event and Mother Nature made sure the race title was just that; sunburn.
Posted by denalifc at 8:04 PM 2 comments: 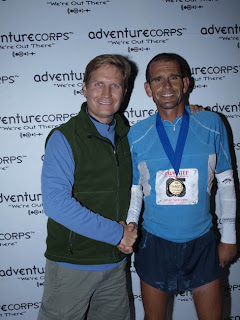 Tomorrow 12th of July begins the 2010 Badwater 135 mile ultramarathon in California's Death Valley. My friend Kelvin Marshall is one of the 90 selected athletes. Good luck Kelvin.
After crewing at Badwater for 3 years, 2007 for Scott Jacaway and 2008 and 2009 for Kelvin I sadly could not make the trip to Death Valley for this years race. I will miss it terribly
The race provides a "live" webcast. Due to the location it is not live like on TV but generally includes live updates as runners it the 5 or 6 checkpoints along the race and regular photo updates. www.badwater.com/2010web/index.php
Also competing in the race is Chicago's Adrian Belitu and Aurora (IL) Zach Gingerich.
Good luck to all runners, staff and crew including Kelvin's 2010 crew of Matt, Francine, Anna Maria and Denny. Stay cool guys.
Posted by denalifc at 7:52 PM No comments: