On April 25th, 2015 the "Run with the Lions 5k" run/walk race will take place at Danada forest preserve in Wheaton IL. The race is a benefit for the PTA at Longwood Elementary school, in Naperville. The proceeds help the PTA put on programs for the kids that attend the school.

Sign up for the race is just $20 by April 1st (and still only $30 after). As well as helping a worthy cause you will receive a great tech T shirt, a scenic course, a finishers medal, great age group awards for the fast folks, and some good post race refreshments. The race also starts on the Danada horse training track which is famous for being the training ground of a former Kentucky Derby winner (link at end of post to a story about the horse written by a friend of mine, Heidi). And unlike downtown Chicago races parking is free.

Last year, first year, the race was held at St James Farm FP. I ran the race and was very impressed with everything about the event.  Move to Danada is because of construction at St James Farm. I am sure it will be an awesome event like last year and I will be there.

Check out the race website which is full of race information and a link to sign up.
http://www.runwiththelions.com/ Another year of the Muddy Monk trail races has began, 7th of March with the Punk the Monk 5k trail race in Lakewood Forest Preserve near Wauconda IL and I was there to volunteer.

Most years the Monk holds 12 trail races at various Chicagoland forest preserves on a variety of trails; limestone, grass, dirt, single track, snow. The races include some cool SWAG in the form of great T shirts, a finishers award (drink glass, maybe a medal for longer events), beer and hot dogs at the finish and those great running courses plus a great entry price. For 2015 Mr. and Mrs. Monk have scaled back to four races as Mrs. is expecting a little monk this year.

Arriving right at 8am for the 10am race start, the race staff had been busy getting things set up at race HQ, a picnic pavilion right next to a bat shelter  (http://www.lcfpd.org/lakewood-shelter-e/) while RD Monk was out setting up the course. I was tasked with handing out T shirts along with Sarah who would be running the race. A well oiled crew had people looking up the runners bib number while the runner was signing the waiver. A call for the actual bib and shirt size was given so while Sarah and I got the right size shirt others pulled the bib. Runners grabbed some pins and headed back to their cars. Barely a line of people waiting.

Close to the start of the race another volunteer Mike and I was driven by BJ to the half way point along with Bob the photographer. We set up a small table, poured water and waited for the first runners. It would not be long until we saw them emerging from the forest into the trail the Monk had laid out around a big field. Due to the deeper snow it made for hard work for the lead guys who were also basically breaking trail. The later runners had a well trodden course in part. Despite the tough snow conditions all the runners passing through the aid station seemed to be smiling and happy to see us. Some stopped to take a break, others passed through with or without wanting water. After the last runner we packed up the aid station and waited for BJ to collect us. There was around 250 runners in this race and we only had to pick up 3 cups off the trail, the rest had been tossed into a big blue barrel we placed a little down the trail. Got to love trail runners. 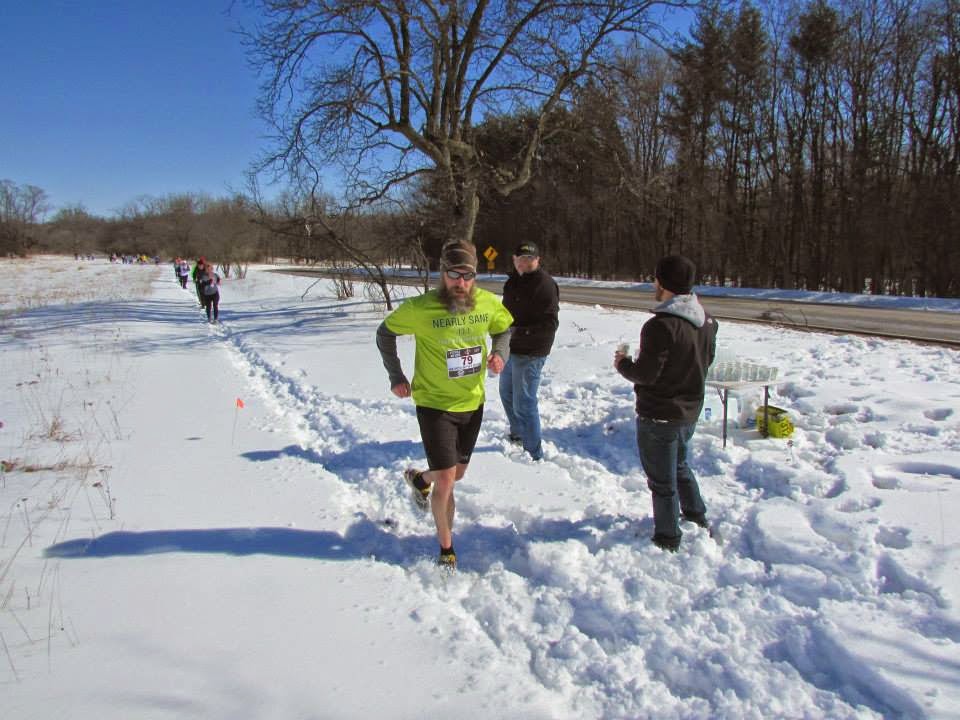 Mike and I handing out water.

Back to the race HQ. Chubby Wieners were giving out hot dogs including a vegan variety. Pipeworks Brewery was serving their fine beer and there was a selection of granola bars, fruit snacks and twizzlers. And a crew from National University was doing free massages. You can tell The Monk is also an ultrarunner and trail runner. All that was missing was boiled potatoes.  The staff also had some cool Muddy Monk merchandise for sale, some from previous races and some logo hoodies.

So was The Monk Punked? Yeap but only just. The Monk, aka The RD aka Art finished 17th overall.

More race photos are on the Muddy Monk Facebook page. Most from the sort of half way aid station, some from the finish and race HQ.

So another Muddy Monk race is done and another season as begun. If you like old school style races with a modern feel yet laid back and with some fine SWAG check out the Muddy Monk races. I hope to be at the half marathon in August (limestone) and the Thriller race in October (dirt trails). One I will run, the other I will volunteer at.

Congrats to Art, Liz, their family, all the volunteers (yeah me), the sponsors, and the runners.


What a great winter day to run trails in Chicagoland.

All logos, photos and links copyrighted, patented, trademarked (if they are) owned by Muddy Monk and all their AKAs