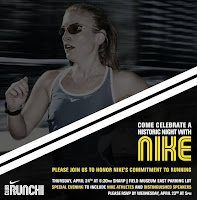 I was invited to attend a special Nike event to celebrate Nike signing on as the footwear and apparel "sponsor" for the Chicago Marathon who are replacing New Balance. My friend's, Lynne, daughter in law works for Nike in their Chicago office.

Other than the Nike promo in the email I received via Lynne neither of us really knew what to expect but in the end it was a nicely done evening.
After walking from my office in the far west loop we arrived at Chicagos' Field Museum to see a big white tent and a finish line staging area including timing clocks and finish line banners. The Chicago Niketown store was holding their weekly training run from the store which this week was to end at the Field Museum. Apparently none of the runners knew what was going to happen at the end of their run.
Lynne and I walked around chatting to folks we knew from the Chicago Marathon office, Nike office, local RDs and race announcers, owners and staff from Fleet Feet Chicago and Running Away, various local running coaches etc. The big white tent was set up with a small stage with chairs and mics, a couple food and drink stations and Johnny Mars from WXRT spinning disks http://tinyurl.com/45po5h , who is a runner himself. Dave the PA announcer gave us updates of the runners headed to the Field Museum. Nike had also got a number of volunteers to play finish line fans. Of course as the first runners approached the heavens opened again. All the runners were decked out in Nike Commit to Run T shirts and many looked surprised at what was greeting them.
After the last runner was home the evening started inside the tent. A short promo video was played then Dave introduced a couple executives from Nike who gave speeches, then the marathon RD Cary Pinowski and finally Nike athlete and USA Olympian Abdi Abdirahman http://www.usatf.org/athletes/bios/Abdirahman_Abdi.asp who was "interviewed" and did a QA session. 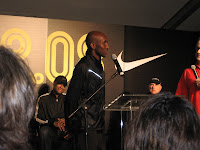 The Marathon also "raffled" off to the Niketown runners 10 slots in the "sold out" race. All the runners were then bussed back to Nike Town. This ended up being a nice evening despite the rain. Thanks Lynne and Amy for the invite.