Year three of the Christmas in July ultra races in Lisle, IL. After volunteering the first two years it was time for me to lace up my running shoes and put one foot in front of the other for 12 hours on a 0.97 mile black top loop. 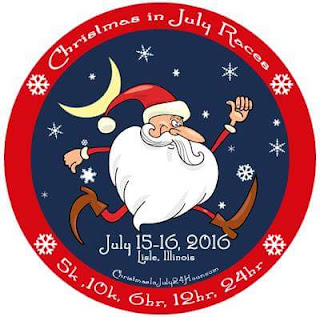 The race is put on by the DPRT RDs Ed and Terry both ultra runners themselves and Brian another ultra runner. Brian was sadly missing from the event this year due to breaking his leg in 5 places 10 days before the event when out trail running. Heal up fast Brian. Christmas in July races (CiJ) have found a following in the local ultra community and are loved by the Village of Lisle. To introduce runners to ultra running the RDs also put on a 5k and a 10k around Lisle's Community Park and neighboring office park. The timed ultra of 6 hours, 12 hours and 24 hours are contained in the park itself on a 0.97 mile loop (it was not possible to get exact 1 mile but then ultras are supposed to be a challenge) which is primarily black top paved and a small concrete sidewalk section. Given the fact that myself, the RDs and many of the ultra runners prefer dirt and limestone trails this added to the challenge but then again Badwater which is due to start a few days later is all paved road I was not going to complain.

I picked up my race number, timing chip (on ankle band), T shirt, a BUFF and wooly beanie during the week after work so just had to arrive at the event ready to go. I filled a small sports bag with some things such as change of running gear, a running jacket (it had rained year before), extra pair of shoes, plus a selection of nutrition products and electrolyte mixes. Also had a headlamp, my MP3 player - surprising as I NEVER use music when running and my Garmin which I knew would only last 5 hours. Plus a tote bag with a few water bottles. A fold up seat was in my car as it always is.

Arrived at the Lisle Senior High School which is in the middle of the park - nice setting for a school, finding plenty of parking and in time to meet friends and watch the 24 hour start at 10pm. Once they were off I carried my bag, chair and tote over to my friends Julie and Michelle canopy which was set up near the start/finish area right in the middle of what had become an orderly tent city. My set up was easy. Unfold the chair, put bag beside and arrange water bottles. Tossed my phone and asthma meds (just incase) in my waist pack, donned my favorite Clif Bar cap and turned on my headlamp.

Oh headlamp not working, darn it. Checked it and notice one of the AAA batteries had popped out. I had a small basic handheld light in my bag and by chance it too used AAA batteries, Mild panic over. As it was I ended up not using my headlamp during the race as it was well lit and my eyes adjusted to the darkness very quickly.

Just before 11pm the 12 hours gathered at the starting area so RD Ed could say some words. I started right at the back but a few got to the start line a few seconds later so I was not last to start :-)

The loop was really easy to follow and not because I was following everyone else but there was lights in bags along the whole route plus inflatable Santa, reindeer, snowmen and arrows in the right place. The loop went along the DuPage River, the park lake, over a cool bridge with running water canyon below, around a sled hill with a small climb leading to the tent city, diving back along the lake and festival park stage and into the HQ staging area. Very scenic even after multiple loops.

I had no real goals for this event. Longest run of the year was around 4.5 miles. Seriously thought a half marathon would be nice. No way would an ultra distance happen which was no issue. After 90 minutes I was already at 5 loops. Took a break and thought 5 miles plus a break every 2 hours equals an ultra. I quickly dismissed that thought and it was for the best. Once I had run longer than my limited training my progress slowed dramatically and the breaks got longer. But I was having fun, chatting with friends and cheering everyone on. As I had worked the Friday of the event I knew a nap during the race would be for the best; the one hour ended up being two hours but by that time 14 loops had been completed. Goal achived but more to come. I slept in my trusty fold up chair but with temps being chilly (for July) over night I woke up cold, just glad I had put on a running jacket before the break. Many people who were resting were in blankets and fleeces, smart. Took me a good full loop to warm up basically just hiking. Another break just before daybreak then finishing up with a few extra loops.

Waiting for final results but ended up with 19 loops or just over 18 miles (18.47 I think). Calling it 18 miles and although that is not much for 12 hours I am very happy with the result.

RD Terry was there to greet me when I finished and hand me a 12 hour medal. We chatted about the race for a little bit. I'll be volunteering at his DPRT and maybe running the half as well. Watched others finish their last few loops (fast guys had time for a few more; I finished with some time to spare but not really enough to get more in).

Although I have done four trail 50k races this was only my second timed race. My first which was my first ultra distance was Danville's Howl at the Moon many years (or moons ago). That is held on a 3+ mile loop. Although CiJ was around a mile loop there are some elements that are similar such as seeing the same aid station often, seeing the same runners over and over again - as they pass me, and all the tents.

CiJ is a great event, well organized and so caring for the runners. Next year I will be back but to volunteer. DPRT 50 (plus marathon and half) is in October put on by 2 of the CiJ RDs       http://www.desplainesrivertrailraces.com/

And to end a photo from near the end of the 12 hour. Tom, myself, Michelle and Julie. Tom and Julie did the 24 hour both hitting ultra distance (Tom finished quick so he could leave early). Michelle and I both hit out goals and made it fun. Photo by and from Annette Smith 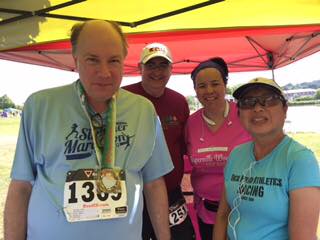