Last year I did the Solider Field 10 miler. These days I don't do many races and do even less on roads and paved trails preferring to stick to dirt trails and a little limestone. But Soldier Field was so well organized in 2011 I wanted to return and do it again. 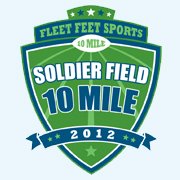 Thanks to Clif Bar I received a race entry. Unlike last year when I was given a bib number in the speedy corral start and 7000+ people passed me I was assigned to the more sensible number 8. Unlike last year my training was not where I wanted it to be. I had done a couple 8 mile runs and one trail 20k race back in March but really was so under prepared for 10 miles on pavement and concrete although I knew I'd finish.

Last year I had set a goal of breaking 2.10 although deep down wanted 2.00. Back in the days I could run faster and my 10 mile PR is around 1.17. Guess I am getting older and some previous medical issues had changed the speed but at least I can do the distance and longer.  Last year I did 1.48. I knew this would not happen this year but could I break 2 hours?

Going into race day the weather forecast where all doom and gloom with hot humid temperatures forecast. Madison Marathon which was due to be held on May 27th changed in advance to a half marathon for all. I've ran in Death Valley in July when the temperature as been over 100 on my run and during the day hit 128 but Death Valley is a dry heat and I'd been heat training to crew at the Badwater 135. Chicago has had warmer temperatures this year but not to get ready to run 10 miles in the heat.

Race morning came and the warmer forecast had  replaced by thunder storms and bad rain. The temperature dropped to the 60s but the wind came up. Luckily the rain did not reach the race course, just large black clouds visible a few miles to the north, someone said it was raining in Evanston.

The race started with the elite corral and then one by one each corral was sent on it's way. Being in corral 8 I had to wait 27 minutes to start but it meant a clear path due to the gap between corrals. The start was well organized and for an event of this size that would be running the narrow Lakefront bike path on the return journey spreading out corrals is the way to go. Just like last year I started way to fast hitting mile one in 9 or so minutes. It is so easy to get caught up in the excitement of the race. I slowed down and knew it was the best thing to do. Although I had that goal I mainly wanted to enjoy myself and have fun. We headed through McCormick place onto the service road for the big expo centre before hitting Lakeshore Drive in two south bound lanes. This road is normal crowded with traffic, today two lanes had 15000 runners (Sunday it held 20,000 cyclists when LSD was closed to all traffic but bikes). Just over mile 4 I heard a voice behind me "Hey Coach". It was my friend Sarah. I was Sarah's group leader when she trained for her first marathon and has called me Coach ever since (I love it). We gave each other a hug and then Sarah powered on to a good time. Finally we hit the turn around leaving LSD to join the bike path. And we hit the wind, and it was strong. I had to pull my Clif Bar running cap tight on to my head and the race number pinned to my shirt was trying to become a kite. The return was tough due to the wind, and the rising temperature and humidity plus I was not really ready for 10 miles on such a hard surface. But still I plodded on, made sure I got Gatorade at each aid station, refilled my handheld water bottle (a trial runner even uses them in road races!!) took a few walking breaks and was soon closing in on Soldier Field. Just after we returned past McCormick Place we moved to the road that runs a long Soldier Field's east side. There was a lot of people cheering on the runners. Security and volunteers directed us into the stadium via the players parking and through the players tunnel out on to the field. Across the grass (does that count as trail?) with the jumbotron showing us finish even though for the second year I did not see myself and across the half way line finish. I had a good look at the stadium from the field level. It looks very large from down there. After leaving the playing area we went through the inner part of the stadium and out into the corridors to collect a finishers medal, food bag, water and Gatorade and the finisher blanket.

That was tough for me as explained but my goal of breaking 2 hours happened with 1 hour 56 minutes and some seconds. I was happy given everything. I know if I train for next year (OK I said next year) and add some road running to my trail running I can totally beat both my Soldier Field times. I'll not get back to days past but that is not on the agenda

Just like last year this race was so well organized. Dave and his crew at Fleet Feet, all the volunteers, the staff at Soldier Field, the City of Chicago and all the sponsor especially Clif Bar (who I work expos for) are to be commended for an awesome race with a great theme and cause (Military Veterans/Active and also American Cancer Society). I'll be back

Race results can be found one the race webstie http://soldierfield10.com/

I'll add photos when I get some but the finishers medal, race T shirt and finishers blanket are below (photo "borrowed" and copyrighted from/by Fleet Feet Chicago, thanks Dave!!) 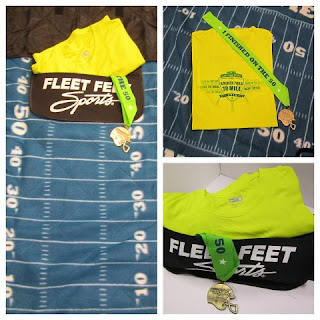 Great job Ian! I love your description of the course. I have never run it so now I feel like I have an idea of what it is like.

I love that Sarah calls you coach! Too fun!

Good post. The race just gets better and better each year and next year is the 10th anniversary so definitely try to get it on your calendar