Another MUDD run but without the mud

It's always fun to run a new trail and have some great tour guides to show one around. It doesn't happen very often but today was one of those great days when I ran a new trail system and had a few great friends run with. 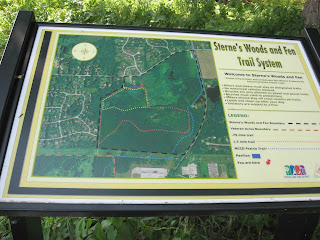 Today I headed north to Crystal Lake to Sternes' Woods and Veteran's Acres. These are two connected systems http://www.crystallakeparks.org/Parks-Facilities/Veteran-Acres.htm with miles of single track, wider cross country ski/hiking and a paved trail. These trails are the training ground for the MUDD runners.

Without a guide or good knowledge you could easily get lost on the interwoven trails. I've in the past searched for maps of these trails and they are very limited and basically no existent for the single track . Maybe that is a good thing as I was about to find out some of the trails are very hilly, and narily. But then they make for a good training routes for experienced trail runnerss and even newbies with some care.

My guides for the run was MUDD and NLUR runners Carol and Julie. We would run into Dorn about 1.5 miles from the finish, so I had three great guides for the morning

﻿
﻿﻿
﻿ Carol decided we would run the Frosty 50k loop which was around 5.5 miles. I was just happy to follow the pair as it was all new to me and I had no idea where we was going. First was a gravel service road out of the parking area which was also the first hill. Over the course of the next hour we dived in and out of some great single track with climbs that are unknown in Chicagoland with roots and rocks a plenty. We took a detour to one of the only remaining "Hobbit" hut that had been built and promptly decided it would make a great aid station for Earth  Day 50k in two weeks. The photos above were taken on Julie's phone (sure she will not mind me borrowing them). Back onto the trails and the next stop was the infamous Possum Toll booth. A rather large tree had fallen across one of the trails a while back. It was so big that a chunk had to be cut out of it to allow trail access. More single track including up and over some hills with some eroded old trails that are so steep no uses them these days.

Around 1.5 miles to go we run into Mr 100 mile Dorn who's out for a leisurely 3+ hour run for time on his feet. Dorn as a few 50s and 100s to run this year. Carol was having a leg issue so took the wider track back to her car while Julie lead and Dorn following took me to Legbone trail. Apparently one of the MUDD runners had found a deer leg bone on the trail during a run. He moved the bone off the trail but somehow it was back in the same location the next day. I didn't see the leg bone but this was a nice stretch of single track that I was able to run relatively fast. I am sure Dorn has never ran so slow.

Finally back at the pavilion where we started. What a great trail system. I loved every minute of it and hope to run it again in two weeks during the Earth Day 50k   http://www.muddrunner.com/ which I'll be volunteering at. I said this was a new trail system  but I've spent some time at the pavilion twice before. I voluntered at the Northwest 5/10 mile trail race and also "helped" 3 MUDDs run 100 miles there last year but neither time did I get out on the trails, now I have.

A BIG thanks to Carol, Julie and Dorn for running with me. Also thanks to the MUDD and Queen MUDD Michele for all they do for the trails. I'll see you all in two weeks.
Posted by denalifc at 8:22 PM

I did a 10K there a few years back and felt like I would have gotten lost had I not been following people!

I am suprised they do Ultras there!

The ultra is new this Earth Day. Michele RD has created a 5 loop course mostly on single track including the hills. There was a "non event" 50k this past winter on snowy trails and 3 guys got permission to run 100 miles, think it was 5 mile loops, summer of last year.