No not by me but by a friend of mine, read on. 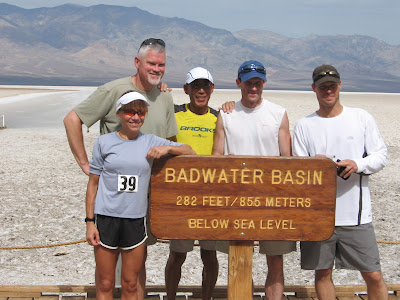 You all know how much I like the Badwater ultramarathon. I've followed the race for years. First was just reading about it then along came the DVD "Running on the Sun" and then friends doing the race and yet more reading and checking results. Finally in 2007 my dream of being part of the race came true when my friend Scott from Downers Grove asked me to be on his crew team. The race blew my mind, unless it was the 125 degree July heat, maybe both. I had an amazing time at that race. In 2008 with no one friends to crew I found an Aussie, Kelvin needing a USA based crew so along with my friend Steve I crewed Badwater again. Kelvin then did the race again in 2009 so I crewed again. Sadly I could not attend in 2010 but followed the race on line and played all my DVDs (five in total), watched You Tube clips etc and even planned a noon time run at Springbrook with Cat.

One of my good friends is Lisa Bliss an ultrarunner from the Midwest currently living in Washington State. Lisa has been the Badwater head MD for years. Lisa as ran the race twice including in 2007 when she won. This year Lisa has decided to do a solo unsupported run from Badwater (282 feet below sea level) to the top of Mt Whitney (highest point in lower 48) in July. The race finishes at the Whitney portal trail head at nearly 9000 feet and after 135 miles. Lisa is going to around 14500 feet and 146 miles. (Race finishes lower due to current government rules). By solo unsupported she will have no support or crew, has to carry all her supplies (food, water, ice etc) in a cart that she'll need to pull or push and accept no help from anyone. Her boyfriend, Tim will be in the Valley for security and safety but that is it.

This will be one long hard run. Even before Lisa gets to Mt Whitney at mile 122 there is miles of straight never ending roads, two mountain passes both around 5,000 feet with long climbs and descents, heat, wind, traffic and did I mention no restocking. Then the climb up Mt Whitney begins. First it is a steady doable uphill until you hit the switchbacks when the grade gets steeper. Then the paved road runs out and Lisa will have to hike 11 miles up steep switchbacks with some sheer drops in possible unpredictable weather than can include wind, rain, ice, lightening, snow - yes in July. Mt Whitney creates its own weather.

If anyone can do it Lisa can. To the best of my knowledge (and what Lisa writes) only one person has ever done a solo unsupported run. Some others have tried but Marshall Ulrich is the only success. Lisa can be number two. www.badwater.com/stories/1999/99ulrichsolo.html

This July will be a busy month for me, first following the Badwater race then following any reports that might come through on my friend Lisa.

If any one can Lisa can.
Posted by denalifc at 6:55 PM

Thank you for your encouragement and friendship, Ian!